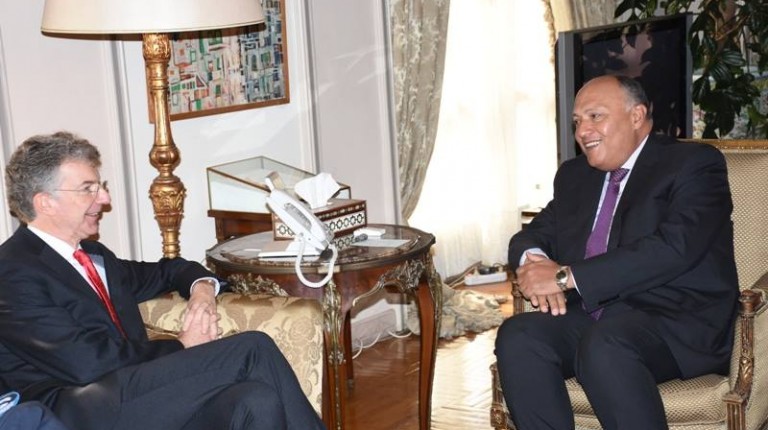 The minister stressed that Egypt is focused on supporting and strengthening its relations with Germany, spokesperson for the ministry Ahmed Abou Zaid said in a statement.

Shoukry also expressed his gratitude for Germany’s support for economic reform in Egypt and the ongoing negotiations with the International Monetary Fund in this regard.

He also stressed that the Egyptian government is determined to take the necessary measures to activate the economic reform programme, regardless of the difficulties, pointing out that facing problems, implementing radical solutions, and not escaping from difficult decisions is the approach the government and the Egyptian leadership is currently abiding by.

The spokesperson added that Heusgen was keen to inquire about Egypt’s vision and evaluate the state’s current position on the Syrian and Libyan crises, as he reviewed the various elements of Egypt’s stance on the situation in the two countries, as presented by the minister.

Shoukry also clarified that Egypt is currently interested in dealing with the difficult humanitarian situation in Syrian cities, pointing out that Egypt is in continuous contact with the Syrian state and the United Nations to ensure that the aid sent to Aleppo is delivered. He expressed deep concern regarding the lack of vision in the international community on how to overcome the current blockage of a political solution for the crisis, which is a result of polarisation between the major powers.

Moreover, Abou Zaid pointed out that the meeting also addressed bilateral relations, and that dialogues reflected a mutual desire to move forward towards greater understanding and rapprochement between the two countries, especially regarding the status of some German organisations working in Egypt. It has also addressed relations between Egypt and the European Union in general and the ongoing negotiations on the Egyptian-European partnership agreement.