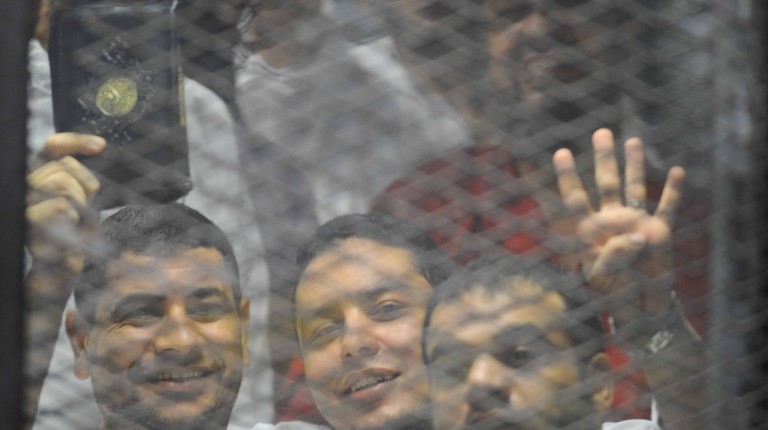 The Cairo Criminal Court on Tuesday postponed the “Rabaa sit-in dispersal” case to 19 November. The case involves 738 defendants as well as known photojournalist, Mahmoud “Shawkan” Abou Zaid. The court also decided to release two of the defendants, Omar Zidan and Abdel Kareem Hafez, after medical evaluation showed that both were infected with the Hepatitis C virus

Karim Abdel Rady, a lawyer from the Arabic Network for Human Rights Information (ANHRI), who is representing Shawkan in the case, said that during the court session Shawkan’s legal team demanded an official report from the court to send the photojournalist for medical tests to determine whether he has also contracted the virus. If it is found that Shawkan is also infected with the Hepatitis C virus it would mean that he could be released from prison on grounds of having an existing medical condition.

The defendants face charges of engaging in armed conflict with security forces, harming national security, attacking civilians, destroying public facilities, and supporting the Muslim Brotherhood, which has been labelled as terrorist organisation.

Shawkan’s family previously stated that he was suffering from poor health conditions due to his illness while in prison. The photojournalist has been held for more than 1,850 days since his arrest in 2013 while covering the Rabaa Al-Adaweya sit-in and its dispersal.

The case includes the largest number of defendants among political cases brought to trial after the ouster of former Islamist president Mohamed Morsi.