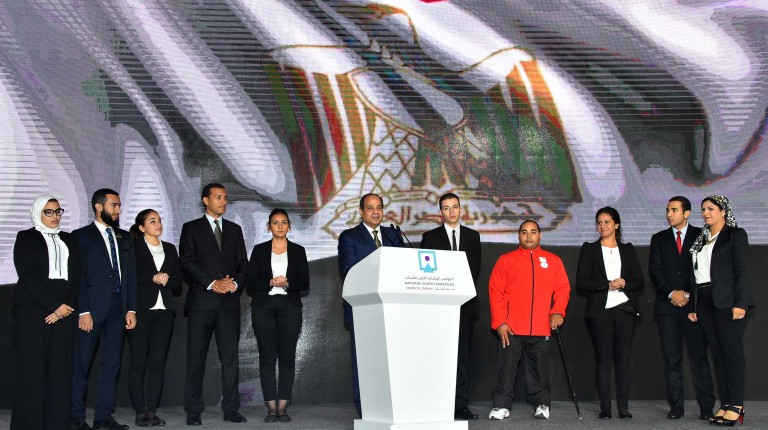 Despite its acceptance by many political parties, activists and right groups expressed uncertainty regarding the seriousness of the newly-formed Detained Youth Committee; however, they still will address the committee to release detainees arrested on charges which contradict freedom of opinion and expression.

Different groups prepared documents that included demands calling for the pardoning of young detainees arrested for opposing the state in protests or through opinions and writings.

The Freedoms Committee in the Press Syndicate listed all the names of journalists arrested for publishing content criticising the government’s performance or in other cases, and explained the detainees’ poor condition while in detention.  The list, that included 29 journalists, was submitted to a committee member and was also given to Mohamed Abdel Aziz, a member of the state-affiliated National Council for Human Rights.

The Detained Youth Committee was announced by the president during the three-day, state-sponsored National Youth Conference held in Sharm El-Sheikh last week.

The president’s decision came following a statement from prominent politician Osama Al-Ghazaly Harb, who is also appointed to head the committee. Harb called for presidential pardons for young people detained in nonviolent cases and also for others who were detained without judicial charges.

The head of Social Popular Alliance party (SPAP), Medhat Al-Zahad, told Daily News Egypt that his party and other parties under the democratic current will present a draft law to the committee to issue comprehensive a pardon for all “opinion detainees”. This draft will cite all articles in Egyptian law and the Constitution that prohibit arrests for freedom of expression.

As for why the democratic parties preferred to draft a law for a comprehensive pardon for these detainees, he explained that lists of names always face rejection due to the state’s opposition towards certain names for political reasons.

This draft law was previously submitted several times to parliament and was rejected, Al-Zahad said. He also strongly believes that no one should be arrested for issues regarding freedom of expression.

Al-Zahad concluded by describing the committee as ineffectual for detained youth, saying: “The issue does not require the formation of a committee, because the practice of arresting people for their opinions is something that should not be practiced. ’’

The committee aims to aid detained youth by collecting information regarding their legal situation and sending their cases to the office of the presidency to decide whether they deserve to be released. It will work in coordination with the parliamentary Human Rights Committee.

Criticism surrounded some members of the committee, like the choice to include member of the parliament’s Foreign Affairs Committee Tarek Al-Khouly , media figure Nashwa Al-Houfy, and Karem Al-Saqa from the parliament’s Youth Committee. The three are well-known supporters of the state and its decisions.

Al-Houfy has previously opposed presidential pardons and is known for her hostile views on political activists and their movements.  She has also been criticised for her praise of the controversial Protest Law which prohibits people from protesting and stipulates jail time as a penalty.

Their presence on the committee raises questions of how people who have been known to support the president, defend the state’s actions, and have vocally supported the state’s decision to imprison protesters were appointed in a committee which is to aid in their release.

Human rights lawyer Mokhtar Mounir said that the presence of Al-Khouly and Al-Houfy was illogical and raised questions on how the committee members were selected.

Mounir asserted that this selection impacted the objectivity and credibility of the committee.  He also depicted the committee as a “facade” for the state’s image and doubted the state’s seriousness in releasing detainees saying: “the state has previously assigned its judicial system to detain those youth’’.

The lawyer added: “I don’t expect that such a committee would release political activist such as Ahmed Douma or Alaa Abdel Fattah. I’m sure it will end up only releasing 100 or 200 prisoners who were arrested for around a month or two, and not those who are serving harsh prison sentences for years in fabricated trials.”

Commenting on the makeup of the committee, youth general secretary of the Al-Tagamou party Alaa Essam confirmed the state’s intentions of aiding in the release of detainees, saying: “the committee was decided and formed after only six days which clearly proves the state’s seriousness.’’

He praised the committee, describing it as good step and only denounced the presence of Al-Houfy due to her previous statements.

Essam said that the president had listened to all opposing views against the government during the conference, and welcomed all different suggestion and opinions.

The committee is expected to start its first session within 15 days in accordance with the president’s orders. Al-Khouly previously said in media statements that the committee will only look into prisoners detained in detention on protest charges and not those who have been handed prison sentences.  According to the Constitution, the president can issue pardons, but is not allowed to interfere in judiciary matters.

Multiple international and Egyptian human rights organisations had previously stated that thousands of citizens have been arrested since the ouster of former Islamist president Mohamed Morsi in 2013.