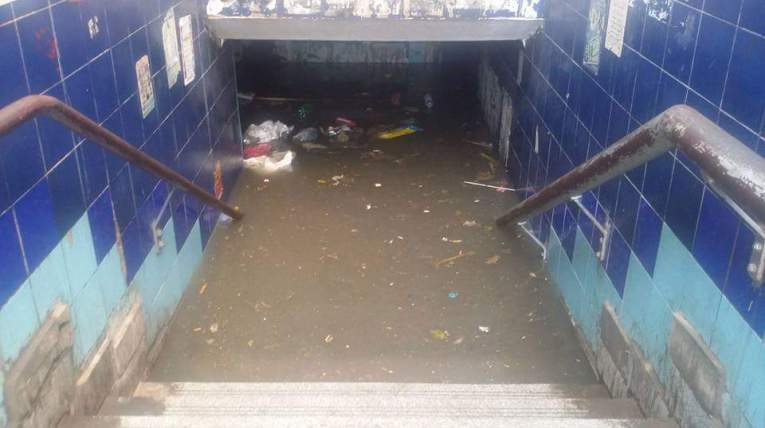 Late as usual is how people describe successive Egyptian governments’ handling of the annual heavy rainfall and subsequent flooding. Ahead of every rainy season, officials release a flood of statements about the government’s preparations to cope with Egypt’s rainy transition to winter, yet these promises always seem to fall flat.

Each year, the impact of the floods require the president’s intervention to direct the rest of the government on the measure that should be taken, despite the heavy rains regularly coming at some time from October to November every year.

The Egyptian Center for Public Opinion Research (Baseera) said that the volume of rain that fell on the Red Sea governorate in the past few days was 120m cubic metres. If this amount had been stored, it would have been sufficient to meet the needs of 120,000 Egyptians.

However, journalists in Qena told Daily News Egypt that 11 more died and 27 more were injured in the governorate.

In response to the accusations of failure in facing the impact of the floods in Ras Gharib, Prime Minister Sherif Ismail said that Ras Gharib city was not among the priorities of the government’s plan for flooding crisis—this plans includes building 160 dams across Sinai and the Red Sea governorates. Ismail alleged that there have been no floods in Ras Gharib for 50 years.

Disaster once again despite allocated funding

That same month, the African Bank for Development (AFDB) agreed to provide an urgent grant of EGP 1m to rebuild damaged property and infrastructure, and support citizens who were affected by the severe flooding in Alexandria and other governorates.

According to Minister of International Cooperation Sahar Nasr, this bequest is named the “urgent aid grant to support flood victims in Egypt”.

Due to causalities last November as a result of heavy rainfall in Alexandria and Beheira, the prime minister implemented an emergency plan for the rehabilitation of irrigation and drainage networks to prevent another similar incident. However, the death toll for autumn 2016 shows that these pledges have come to naught.

Despite these plans and presidential instructions, the same catastrophe happened again and once again the president had to instruct the government to issue monetary compensation and to allocate funding to the rehabilitation of irrigation and drainage networks.

Al-Sisi instructed the prime minister to allocate EGP 50m to compensate all those affected by the flooding, in addition to EGP 50m to urgently develop infrastructure in the affected areas.

Though it announced that it has no budget for raising the efficiency of irrigation and drainage networks, the Ministry of Water Resources and Irrigation provided EGP 50m for the development of these networks, and for expanding, deepening, and clearing riverbanks. This is besides EGP 40m from Tahya Misr Fund to expand and deepen Lake Idku’s banks in Beheira.

The ministry also announced that it has purchased a sufficient number of emergency units, which were supplied to the wastewater pumping stations, also known as lifting stations, to deal with emergencies in the case of high water levels which may cause rivers or estuaries to burst their banks. The ministry has also raised the efficiency of control panels at these pumping stations and has provided spare parts. This was coordinated with EGP 130m from the ministry’s budget in conjunction with a number of Arab financing funds and the Islamic Development Bank.

The Ministry of Water Resources and Irrigation noted that it is cooperating with the Armed Forces Engineering Authority to replace, renew, and double the capacity of wastewater pumping stations that were affected by rainfall flooding last year within two years.

Moreover, the president instructed the Ministry of Transportation and the Armed Forces Engineering Authority to review all damaged or destroyed roads and infrastructure as a preliminary step to reconstructing them.

Spokesperson for the water ministry Walid Haqiqy said in 2014 that the ministry developed a plan to protect governorates from flooding at a cost of EGP 4.2bn. The ministry has completed 160 projects with EGP 2bn so far in areas of North and South Sinai governorates, the Red Sea, the North Coast, Marsa Matrouh, Upper Egypt, and the Delta.

The spokesperson added that according to the cabinet’s decision, the ministry is currently implementing new projects worth EGP 2.2bn over the next three years in the framework of its plan. This amount will be spent on the protection of highly populated cities, and building dams and lakes that have the ability to absorb the largest amount of rainwater to maximise utilisation.

Haqiqy told Daily News Egypt that the ministry spent EGP 130m to develop old emergency pumps because they were designed to drain agricultural wastewater rather than the large amount of rainwater. Some riverbanks in hot areas were also developed to drain the water into the Mediterranean. In addition, the ministry has spent EGP 750m on establishing new pumping stations.

These quantities come from the total EGP 1bn allocated by the president from Tahya Misr Fund; Haqiqy noted that the ministry will also use this money to buy new imported equipment for these plants.

The plants will be ready for operation after a year or a year and a half.

Commenting on accusations that the government did not prepare sufficiently for the rainfall, Haqiqy said that a huge amount of money is needed to protect areas in North and South Sinai and Red Sea, which is not currently available. In the last period, he added, the government spent EGP 400m in Sinai and EGP 150m in the Red Sea and Upper Egypt on cleaning stormwater drains.

Minister of Social Solidarity Ghada Wali approved the allocation of EGP 10,000 to the families of those who died due to the recent flooding and EGP 2,000 for each injured person from the Disaster Management Fund.

Further, the Egyptian Armed Forces distributed 130,000 boxes of food to those affected by the flooding, launched a number of bread production lines, and provided medical convoys to hard-hit areas.

The Egyptian Meteorological Authority sent a strongly worded statement to vulnerable governorates, including those in North Sinai, South Sinai, Red Sea, and north and south Upper Egypt, before the anticipated heavy rainfall, according to spokesperson Wahid Saudi.

“Ministries, agencies and stakeholders can use the online application to check the weather forecast and discuss the reports issued by the Meteorological Authority,” said Haqiqy. “Precautionary measures must be taken—the most important being the closure of main roads to avoid accidents and deaths, but this didn’t happen.”

The infrastructure in Egypt collapsed due to a lack of planning or maintenance plans, professor of crisis management at Suez Canal University Muhammad Bagha told Daily News Egypt. The recent rainfall should have alerted the government to the failed infrastructure—people were electrocuted and the accumulation of water damaged roads and homes.

The government does not have scientific or comprehensive plans for crisis management, but rather manages the aftermath of the crisis.

“Remedy crisis is more expensive than crisis prevention. Instead of allocating EGP 75m for Alexandria to maintain sewage networks, the government could have spent only EGP 20m before the winter season to maintain these networks,” Bagha said. “The deterioration of infrastructure, the state’s neglect and lack of supervision, and the expansion of ashwa’yat [informal housing areas] were major factors in this crisis.”

He pointed out that there are 27 governorates, 4,475 villages, and 33,000 areas in Egypt with incomplete informal structure and a lack of basic services and infrastructure.

Daily News Egypt spoke to families from Ras Gharib in the Red Sea governorate, and from Naga’ Hamady, Qena governorate in Upper Egypt, to take a closer look at the aftermath of the floods.

Aboul Maaref Al-Hefnawy, a local journalist from Naga’ Hamady, told Daily News Egypt that there has been no response from the government and residents have seen no efforts by the state to drain the floodwaters.

The floodwater in the streets was left, and then drained into the Nile; therefore, water in the town has been disconnected for three days.

Al-Hefnawy said: “Due to the floodwater being drained into the Nile, the turbidity has reached too high a level for this natural drinking water to be ingested safely. Therefore, we began a campaign to make people aware to not drink tap water for another couple of days until turbidity settles.”

According to Lenntech, turbidity is a measure of the degree to which the water loses its transparency due to the presence of suspended particulates. The murkiness of water is a good measure of the water quality.

Hoda Mahmoud Sherif, a Ras Gharib resident, said the rainwater accumulated behind Gharib mountain; this then overflowed and flooded people’s homes. To make matters worse, with the water came snakes, crocodiles, and scorpions that inhabited the mountain which caused the death of a number of citizens. The ground floors of all houses were destroyed, electrical devices damaged, money and property were lost, and families were displaced.

Sherif described the recent flooding as a “tsunami”. Officials did not respond—either by providing water suction vehicles or by retrieving the dead—it was the citizens who had to retrieve the bodies and had to get rid of the water and mud from in front of their homes.

Member of parliament from Sohag Khaled Abou Zohad said that the Meteorological Authority issued a warning a month before the heavy rainfall but the government did not deal with the crisis seriously and left the people to their fate in the floods.

Abou Zohad told Daily News Egypt that the government’s shortcomings in facing the floods were apparent not only beforehand but also in the aftermath. The state was very slow in making decisions to save the victims and dispense monetary compensation.

He submitted a request to notify the prime minister about the crisis in Ras Gharib. The city is one of largest oil producers in Egypt but more than 30 international oil companies have stalled operations as a result of the flooding.