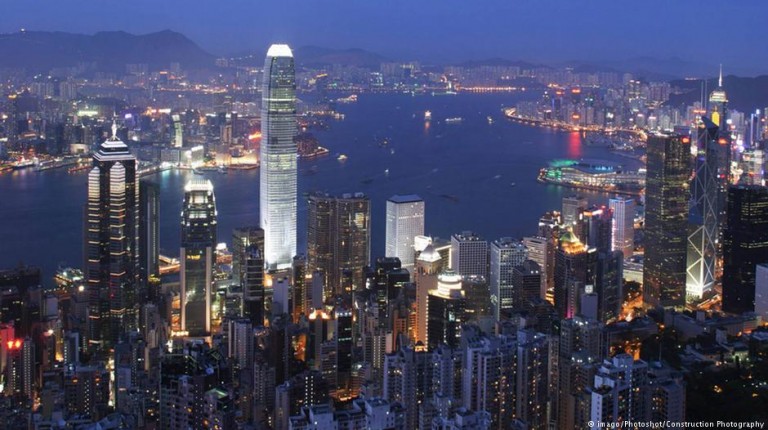 German firms are closely tied to Asia and are making good money in the region’s fast-growing economies. This year’s Asia-Pacific Conference of German Business is taking place Hong Kong. Manuela Kasper-Claridge reports.It only takes 15 hours to unload the Santa Maria. 1,200 containers, many of them filled with perishable goods like fruits and vegetables, are taken from here to the Chinese mainland. The transit times in Hong Kong’s huge harbor need to be short. Every additional hour costs a lot of money and often the ships are already queuing up to enter into Hong Kong’s harbor.

“The harbor is the gateway to China. Many loads destined for southern China are transported via Hong Kong,” explains Stefan Kirschner from logistics firm Hamburg Süd. His company is one of the ten largest container-shipping lines in the world and employs 180 people as well as subcontractors in Hong Kong alone.

“Hong Kong has the advantage that business deals can be made quickly and fairly unbureaucratically here. On the Chinese mainland that often takes more effort,” Kirschner says. He has been running operations here for many years and knows business in China very well.

Over the next few weeks, he faces the challenge of making his ships go faster. A total of five container ships will be going back and forth between Valparaiso in Chile and Hong Kong just to deliver fresh cherries to China.

“The Chinese love these cherries, especially for Chinese New Year, but they spoil easily, which is why they have to be moved quickly,” Kirschner says with a wink and gushes about the “cherry weeks,” which assure extra revenue. Kirschner has no reason to complain. Despite slower growth overall, there are still many goods being exported form China, among them electronics and toys, and the Chinese are eagerly importing goods as well.

If you wander around Hong Kong these days, you get the impression that the skyline is changing almost at an hourly rate. The limited space is filled with ever newer high rises and on top of that, construction of a new subway line is underway in the middle of the city, which is supposed to alleviate traffic congestion.

In Hong Kong, 7.5 million people live on 1,100 square kilometers and land reclamation is being used to add precious additional space along the city’s shore.

The government of the Hong Kong Special Administrative Region, as the city is officially called, is eager to keep the territory attractive. Gregory So, Hong Kong’s Secretary for Commerce and Economic Development, promotes the city enthusiastically: “Hong Kong offers a business-friendly environment, a low and simple tax regime, free flow of information and capital, world-class infrastructure and unrivalled connectivity to global, regional and the Mainland China markets.”

Focus on the Asia-Pacific region

Gregory So is excited about the more than 1,000 participants who have come to the 15th Asia-Pacific Conference of German Business (APK), taking place from November 3-5 in Hong Kong.

During the conference, German and Asian participants will lead in-depth discussions about the region. The topics are diverse, including not only digital interconnectedness of businesses and the expansion of infrastructure, but also opportunities for green technologies.

Germany’s Economy Minister Sigmar Gabriel is attending, as well as the prime minister of Sri Lanka and ministers from Australia, Indonesia, Malaysia, New Zealand and Thailand.

Furthermore, CEOs of large companies – such as Airbus’ Thomas Enders and Siemens’ Joe Kaeser – as well as SMEs that are global market leaders in their respective fields are taking part in the event.

Among them is Martin Herrenknecht whose tunnel drilling machines are being used not just to build subways, but also in the construction of the new tunnel connecting Hong Kong International Airport and the Chinese mainland. The road tunnel will play an important role in the expansion of the airport’s infrastructure.

For this purpose, Herrenknecht AG has developed the world’s largest tunnel drilling machine with a diameter of 17.6 meters. The access to the tube is already visible from outside. The tunnel itself will run 50 meters below the surface of the water and is still in the works. If all goes as planned, the tunnel will be ready for road traffic by late 2018.

The project is a Franco-Chinese joint venture of Bouygues Travaux Publics and Dragages Hong Kong. Still, without the technology coming from the German state of Baden-Württemberg, it probably wouldn’t be possible to build the 4.2-kilometer tunnel.

“A project like this comes along once or twice in a lifetime,” Herrenknecht marvels and one can tell how excited he is about the innovative technology, which is being used here for the first time at this scale. “The preparations alone took two years,” he says.

The engineers almost affectionately christened the one-of-a-kind tunnel drilling machine Quin Liangyu. That was the name of a female 17th century Chinese general, who successfully defended the Ming dynasty against enemies, earning her a lot of respect – just like the tunnel drilling machine from Baden-Württemberg. Its foes, however, are merely geological formations in the South China Sea.