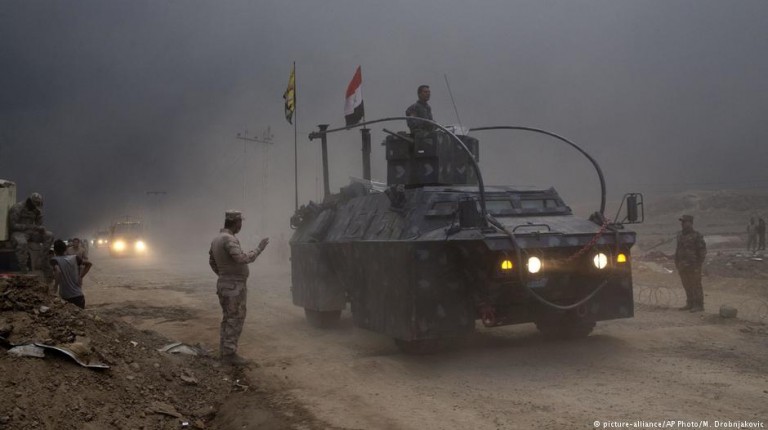 In a rare speech, the militant group’s chief Abu Bakr al-Baghdadi has called for fighters to stand their ground in Mosul. DW spoke to Hassan Hassan, co-author of “ISIS: The Army of Terror,” to examine the implications.DW: What does “Islamic State” leader Abu Bakr al-Baghdadi’s speech, which surfaced Thursday, mean for the Iraqi-led campaign to recapture Mosul?

Hassan Hassan: It means a lot of things. This is the first time Abu Bakr al-Baghdadi has come out and ordered his soldiers to fight a battle until the very end. That’s never happened before. Even Abu Mohammed al-Adnani, the group’s former spokesperson, hadn’t gone so far. This shows that Mosul is very important to the group, very important for its project, and it means that ISIS (Islamic State in Iraq and Syria) is going to stand and fight.

The Americans and Iraqis were hoping that ISIS would choose to flee again, like it has before when it has been under pressure. But that’s not going to happen this time. It is clear that it will stay and fight until the bitter end, which means the battle for Mosul is going to be nasty, it’s going to be dirty, and it’s going to be difficult. If ISIS can hold onto the city for a while longer, it will make it much more difficult for Mosul to be recaptured – harder than the Americans and Iraqis were hoping.

Why is Mosul so important to the Islamic State and al-Baghdadi’s vision?

It’s a good question because people always believed that Raqqa was the center, but Mosul is in fact the center, for a couple of reasons. First, it’s the most populous stronghold for ISIS, and remember that ISIS is an Iraqi organization. Mosul is always going to be more important than Raqqa given this. They have fought there in Iraq the longest. They have a social base – a stronger base in Iraq than in Syria.

Another reason is that Mosul is where the caliphate was announced. Al-Baghdadi announced it from the great mosque in Mosul, and he had been the top leader in Mosul even before he became the leader of ISIS in 2010. So, he knows Mosul very well. Mosul means more to him than any other city. It’s also a very important stronghold for ISIS’ project.

If ISIS loses Mosul today, it would mark a great victory for Iraq, not just because they drove ISIS out of Mosul, but also because the strategy they have for the city is very promising. The composition of the forces that are supposed to go inside Mosul is promising. There are professional forces, counterterrorism forces. There are no Shiite militias, there are no Kurdish militias.

So ISIS’ top priority today is to ensure that the current strategy collapses, that it is not going to stay the way it is, that is going to crumble, and that Shiite militias might have to go inside Mosul. They want destruction in Mosul. They want people inside there to say: “Maybe we were better off with ISIS.” That’s the message ISIS wants to deliver, and that’s the outcome they desire. Even if they lose Mosul eventually, as long as they achieve that goal, they’re set.

Could his speech signal a last stand for the militant group?

It’s not the end of ISIS, but it’s the end of an era, which includes the caliphate project. We know this very well given the history of ISIS. We’ve seen this movie before, where they are driven out of these areas, a void is created, and then they return.

This time it’s going to be easier for them because of the conditions in Iraq and Syria. The conditions that will enable a second or another iteration of ISIS are much more favorable than in 2008, when they were driven out of the urban centers in Iraq.

These conditions include the massive vacuum that stretches from Syria to Iraq. This is no longer just Iraq working with another state, Syria in this case, which shares a massive border with the country. This time we have chaos; nearly a failed-state situation in both countries. ISIS will likely try and operate in a different way, morphing into something else, which does not spell out the end of ISIS, and this is because there are no alternatives to fill that void.

But for now, people are focusing on ISIS’ grasp on territory, and how they will hopefully be driven out of these areas. But we have to envision what is going to come after the loss of these areas. They’re going to be able to continue operating there. They will continue to destroy and wreak havoc in both Iraq and Syria. They are going to continue attacking, and making statements, and they’re going to claim they are still a state, claiming legitimacy in some of these areas. There will be people who will be willing to cooperate with them, while others will be afraid to work against them or work with the government because they will be targeted by the group. That’s going to be another campaign of depletion, which ISIS hopes will enable another return when the circumstances allow. And that’s the optimistic scenario.

Hassan Hassan is a resident fellow at the Washington-based Tahrir Institute for Middle East Policy and co-author of “ISIS: The Army of Terror.”

This interview was conducted by Lewis Sanders IV

US to increase troops in Iraq ahead of possible Mosul operation