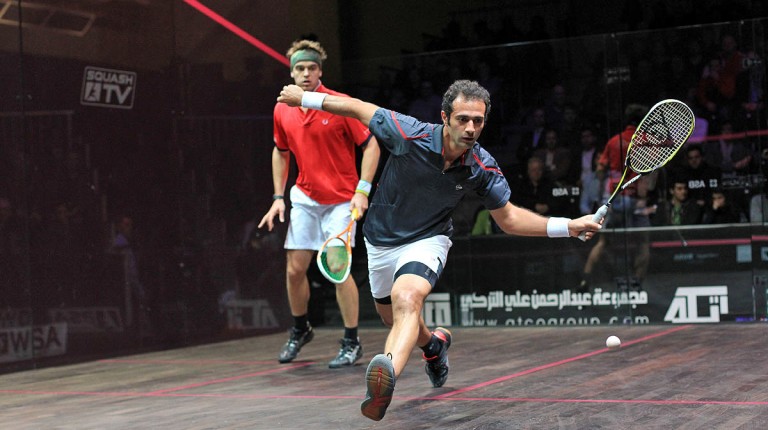 In any discussion about squash, there are certain names that will surely pop up.

These names include Egyptian player Amr Shabana, who is currently the director of the Egyptian national squash team.

Shabana has played squash for more than 21 years. His victories throughout his sports career are numerous.

As part of the Egyptian team, along with Ahmed Barada, Amir Waguih, and Omar El-Borolosy, Shabana won the World Squash Federation’s (WSF) World Team Squash Championships in 1999. It was the first time for an Egyptian team to win this championship.

In 2009, also as a member of the Egyptian team, along with Karim Darwish, Ramy Ashour, and Wael El-Hindi, Shabana won the WSF World Team Squash Championships in 2009.

In January 2006, Shabana was ranked the first internationally, and stayed there for 33 consecutive months.

Shabana and Darwish have retired from playing. The latter is currently the director of sports at Wadi Degla Clubs. He also is the director and organiser of the ongoing 2016 Wadi Degla PSA World Men’s Squash Championship.

Shabana, on the other hand, is currently the director of the Egyptian national squash team.

On the occasion of celebrating the 2016 Wadi Degla PSA World Men’s Squash Championship, Daily News Egypt sat down with Shabana.

After all the victories you achieved, what is your current role in Egyptian squash?

My official position is director, technical adviser, and counsel of the Egyptian national men’s and women’s squash teams.

Players have their own trainers and coaches throughout the year. Outside the court, when players need help with their training, injuries, contracts, communications, travel processes and so on, I am always there.

How are you handling such great responsibility?

I played with the Professional Squash Association (PSA) since I was 15 years old and retired at the age of 36. I joined the Egyptian national team when I was 10 years old.  When I turned 18, I trained myself for squash, fitness, and at the gym.

I was the one handling my travel tickets, and accommodation while participating in championships.

The long journey enriched my experience in squash as I had to deal with numerous details. I have made all the mistakes that could be made—an experience that allows me to help current players avoid these mistakes.

I advise the players according to my experience. Of course, at the end of the day, the decision is theirs.

To conclude, I was chosen for this responsibility and duty based on my experience.

Do you not miss playing in the court?

I played for more than 21 years and I have done all that I could. So now, it is the time to pass on my experience to the ones who need it, and benefit others in order to bring about new champions.

Why did you decide to retire?

Until the very last day, I did not decide to quit. I convinced myself that I would play until I turn 40 or even 45.

I believed that as long as I could not compete to win the championship, there is no point in playing. I did not want to play just to be another player or to be known as such.

I then suffered some injuries in my back and knees, but I still could play. During this time, the Egyptian Squash Association asked me to help players based on my experience.

When I saw that I am not able to win championships, suffered injuries, and could not give much more to play, I decided to retire and contribute to the sport in another way, namely through helping create new Egyptian squash champions.

Aside from winning the world championships and being ranked first internationally, what other victories did you achieve during your sports career?

I won 33 championships and managed to remain ranked among the top ten players internationally for 11 and half years.

What challenges did you face while you were a player?

Every three or four years, generations were changing. Young players became champions and old ones were likely to quit. So I always had to develop and improve myself.

When I was a young player, I depended on an attacking style while playing. I did not depend so much on fitness and I played exhibition squash more than squash that enables the player to win.

What does Egyptian squash legend Ahmed Barada represent for you?

He is a close friend. Speaking about his role in the sport, he was the one who launched Egypt’s achievements in squash back in the 1990s, and I continued his legacy. Barada was the one who paved the way for us.

Injury prevents Ramy Ashour from competing in Tournament of Champions