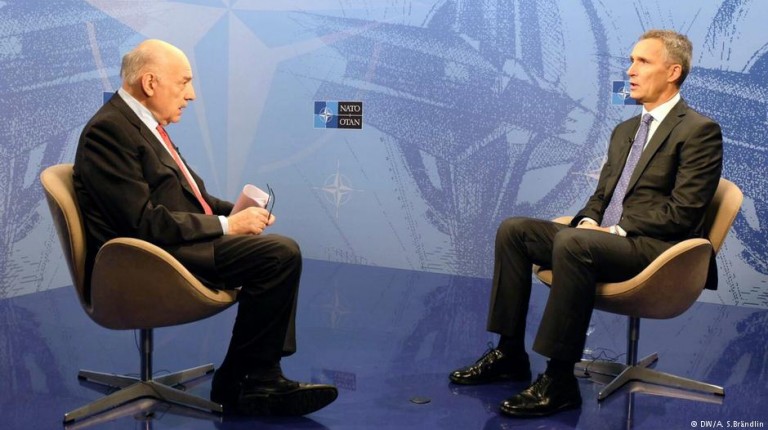 As tensions rise between Russia and the West, NATO’s Secretary General Jens Stoltenberg told “Conflict Zone” why he believes there is no new Cold War. But does his view match the reality of the situation?Relations between Russia and NATO are at their lowest point since the Cold War. Since the outbreak of the Ukrainian conflict in 2014 and Moscow’s invasion of Crimea, there has been increasing military tensions between both parties.

NATO has condemned Russia’s annexation of Crimea, declaring it illegal and refusing to recognize Moscow’s claim over the peninsula.

The United States and the European Union, along with other allied countries, have also responded to the annexation by imposing sanctions on various Russian officials, companies and goods.

What’s more, an arms race has started to take place in the Baltic Sea, with both sides increasing their military presence, leading to many media outlets and officials declaring a ‘new Cold War.’

Are we really heading towards a new Cold War?

NATO Secretary General Jens Stoltenberg denied these claims and said on Conflict Zone that “we are not in a Cold War.”

“The thing is is that we have to describe the reality as it is without exaggerating and talking up tensions,” Stoltenberg told Conflict Zone host Tim Sebastian in Brussles.

Sebastian put it to the Secretary General that his interpretation of the situation between Russia and NATO conflicted not only with the assessment of British and German intelligence services, but also with his own deputy commander of forces in Europe, General Sir Adrian Bradshaw.

At a speech in London in February 2015, Bradshaw said tensions with Russia represented “an obvious existential threat to our whole being.”

“Russia is not the Soviet Union,” Stoltenberg answered. “But we are in a difficult and challenging security environment in Europe. We are not in the partnership we tried to develop after the Cold War, but neither in the Cold War we had before the fall of the Berlin Wall.”

If this was not in fact a new Cold War, how does Stoltenberg see the situation?

“I see a more assertive Russia,” said Stoltenberg, who used to be prime minister of Norway, a country that shares a land border with Russia, before taking on his role at NATO.

“I see a Russia which has implemented a substantial build up, and that’s exactly why NATO has implemented their biggest reinforcement of our collective defense since the end of the Cold War with deployment of troops in the Baltic region and Poland.”

In fact, NATO has tripled the size of its response force to 40,000 troops and has established a joint task force, sending 4,000 additional troops as well as tanks and anti-tank missiles to its eastern borders to improve the defences of its front-line states. The United States, Germany, Canada and Britain will each lead a battalion – that’s 1,000 troops each – in one region.

“We don’t see any imminent threat against any NATO ally but we see a Russia which has been willing to use military force against neighbors, Ukraine and Georgia,” Stoltenberg said.

German foreign minister, Frank-Walter Steinmeier, has criticized this move as being counterproductive, saying “NATO should stop sabre-rattling and warmongering.”

Was this criticism that the Secretary General thought was valid?

“We have to understand that in an alliance with 28 open democratic societies there are different views. Foreign Minister Steinmeier and I absolutely agree on the need for both strong collective defense in Europe, including exercises and political dialogue with Russia,” he said on Conflict Zone.

All for one and one for all?

Collective defense is a cornerstone of the NATO alliance enshrined in Article 5, which states: “The Parties agree that an armed attack against one or more of them in Europe or North America shall be considered an attack against them all.”

The Secretary General echoed this. “The obligation of NATO is to protect and defend all NATO allies. (…) We are sending a clear message: One for all, all for one,” he said.

Russia has also been increasing its military presence on shared borders. In October, Moscow started moving nuclear-capable Iskander missiles to Kaliningrad, a Russian enclave in the Baltic Sea and the country’s westernmost region. Their close proximity to Lithuania, Latvia, Estonia and Poland have caused a number of officials in Eastern European countries to express alarm over what they see as Russia’s provocations.

“As a response to a Russia which has significantly increased its military presence, (…) we have increased the readiness of our forces. We are ready to deploy forces on very short notice,” Stoltenberg said.

Stoltenberg stressed that NATO responses were proportionate to increased Russian presence. “For me the important thing is that we react in a measured way,” he said. “It is about finding the right balance between providing a military response, providing credible deterrence but also avoiding escalating the situation and increasing tensions.”

Why is Turkey still a NATO ally?

The NATO alliance is based on core values. When Tim Sebastian asked Jens Stoltenberg whether NATO really shared common values with Turkey, a country that has recently made headlines for clamping down on free speech and violating human rights, Stoltenberg said:

“Turkey is a key ally because of its location close to Russia.”

He added: “Turkey is important for NATO for many different reasons. Partly the geographic location, partly because it is the ally that has suffered most from the violence and instability in Iraq and Syria, many terrorist attacks, and they have received three million refugees. Turkey is a member of the NATO alliance and the alliance is based on core values,” Stoltenberg said, adding that democracy was one of them.

Asked if democracy is really still a common value in Turkey, where mass arrests of those with contrary views to the government have taken place, including opposition politicians, Stoltenbrg said:

“Turkey experienced a coup attempt in July. Of course they have the right to prosecute those responsible.”