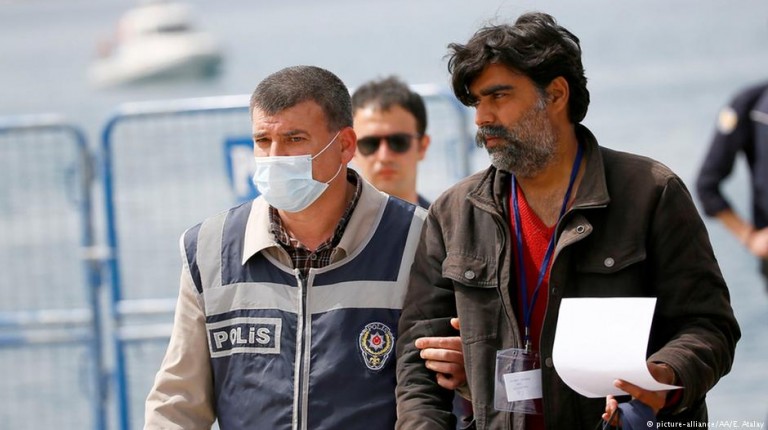 A study by the funded in part by the UK government found that European migration policies, by their focus on keeping migrants out, have only lead to migrants undertaking perilous journeys.Despite condemning the business of people smuggling, European politicians have contributed to its success – that is the takeaway from a recent report by the Mediterranean Migration Research Programme (MEDMIG) of the Center on Migration, Policy and Society at the University of Oxford.

The MEDMIG report offers policy recommendations to address the increase in smuggling and trafficking of migrants. These include addressing the reception and protection needs of migrants regardless of nationality and opening up more possibilities of legal entry into the EU for asylum seekers.

Since early 2015, the number of asylum-seekers traveling to Europe from Africa and the Middle East has risen dramatically, and many of these recent migrants have relied on human smugglers to help them cross international borders illegally. Smugglers often provide migrants with false travel documents or arrange for transportation, including passage over the Mediterranean Sea.

These smuggler-facilitated journeys are dangerous. The UN Refugee Agency reports that 3,740 migrants have died attempting to cross the Mediterranean so far this year, makingm 2016 the deadliest year on record for this route.

The report blames EU migration policy for the rising number of people traveling these dangerous routes. According to the study, European countries have responded to the migrant crisis by restricting entry within their borders. This is in part due to “flawed assumptions about the reasons why people move, the factors that shape their long-term migration trajectories and their journeys to Europe,” the report says.

People ‘forced’ to use dangerous routes

Heaven Crawley, the report’s author, told DW that “border control and the lack of safe and legal routes is forcing people to use smugglers.” Of the 500 migrants interviewed for the MEDMIG study, every one had hired a smuggler at some point in his or her trip to Europe. One in ten participants applied for a travel visa but was refused. Although the majority did not apply, the study found that this was because migrants assumed that they lacked the money to do so or that they did not have access to an embassy where they could apply. “If you were to open up more legal routes, people would use them,” Crawley said.

The report found that the smugglers the migrants used were not always involved in organized crime, but sometimes belonged to the migrants’ own social networks and local communities. Participants reported that law enforcement officers, border guards, and state officials were also involved in smuggling.

When migrants use illegal instead of legal routes, they make themselves vulnerable to human traffickers. But a common misunderstanding, according to Crawley, is that all smugglers are traffickers. “Lots of people talk about trafficking when they mean smuggling,” she says. Both involve the illegal movement of human beings, but human trafficking usually involves sexual exploitation or forced labor.

A spokesperson from the European Commission’s Office for Migration and Home Affairs told DW that they were aware of the report but “have not had the chance to fully explore the findings yet.” They noted, however, that the Commission has worked with Frontex, the European Union’s border control agency, to triple the size of the search and rescue operation in the Mediterranean since 2015, contributing to saving around 400,000 people.

The right exploits the fear of refugees for their own gains: MP in Germany’s Greens party

Trials and tribulations of the Right of Asylum

Al-Sisi confirms he will not close the door for refugees: Filippo Grandi