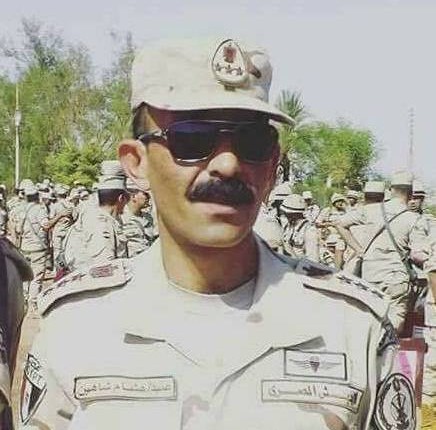 In only two weeks, three high-ranking army officers were killed, either by improvised explosive devices (IED) or direct assassination operations. The latest in the series of killings was an air force major colonel, Hesham Mahmoud, who was assassinated on Friday afternoon in front of his residence in Al-Arish city, according to an official statement issued by the army spokesperson.

According to the army statement released after the attack, Mahmoud was returning from the Friday Prayer when three anonymous militants opened fire on him, instantly killing him.

“On Friday afternoon, three militants opened fire on major colonel Hesham Mahmoud, one of the armed forces’ heroes, in front of his residence in Al-Arish city after he returned from the Friday Prayer, killing him,” the statement read.

Mahmoud was part of the Egyptian Air Force battalions based in Al-Arish city, but was not a member of the forces assigned to combat ongoing insurgency in North Sinai, army sources told Daily News Egypt on condition of anonymity.

“Mahmoud is one of the high-ranking officers affiliated to the Egyptian Air Force. He was born in Al-Arish and had lived there until his assassination in Al-Azhar Street, where his residence is located. The assassination operation took place while he was spending a vacation with his family,” an army source told Daily News Egypt on condition of anonymity.

“Sinai Province” only claimed responsibility for the aforementioned assassination operation, and did not link itself to two other military operations that targeted high-ranking army officers.

Six days ago, leader of the commandos forces battalion lieutenant colonel Ramy Hassanein was killed in an explosion that struck an armoured vehicle on El-Gowra road in the North Sinai city of Sheikh Zewaid, along with two conscripts. Four other conscripts were injured in the attack, army sources told Daily News Egypt on condition of anonymity.

The armoured vehicle had been targeted by an IED while it was driving through El-Gowra road.

No group officially claimed responsibility for the IED attack; however, several social media users affiliated to IS claimed that “Sinai Province” had carried out the attack.

The third assassinated army officer was supreme army leader Adel Ragaai due to his position as the head of the army’s 9th armoured division. The assassination took place in a totally different place and under completely different circumstances far from tumultuous Sinai, namely in front of his residence in Cairo.

Ragaai was killed on 22 October in front of his residence located in Al-Obour city, where anonymous militants driving a black private vehicle opened fire on him. Two bullets pierced his head, according to army sources who spoke to Daily News Egypt on condition of anonymity.

Ragaai’s assassination is considered critical as for the first time, such an operation took place inside Cairo, far from North Sinai where ongoing military confrontations are rising between the army and “Sinai Province”.

In the same context, the Ministry of Interior announced on Friday night that it succeeded—after “thorough monitoring”—in arresting members from the three militant groups “Lewaa El Thawra”, “Hasm”, and “Sawa’ed Misr Movement”, saying that these groups are affiliated to the outlawed Muslim Brotherhood, according to an official statement issued by the ministry’s media office.

Preliminary investigations carried out by the Interior Ministry revealed that five arrested Brotherhood members have effectively participated in the establishment of the three aforementioned groups to execute military operations against public, police, and army figures.

It moreover clarified that the arrested were responsible for executing several terrorist operations, on top of which came the failed assassination attempt of former Grand Mufti Ali Gomaa earlier in August, and the vehicle bomb that targeted assistant general prosecutor Zakaria Abdel Aziz in September.

The Interior Ministry’s statement noted that the three militant groups that emerged from the Brotherhood are financed by foreign intelligence apparatuses, and receive instructions from fugitive, leading figures of the Brotherhood, such as Ali Batikh, who is currently based in Turkey.

The arrested members confessed that they had received military training in a mountainous area in Aswan governorate. Their confessions were broadcasted on a state–owned TV channel through a report prepared by the Interior Ministry.

During the televised confessions, the arrested members of “Lewaa El Thawra” explained the details of the assassination attempts against Gomaa and Abdel Aziz. However, the group’s recently declared responsibility for killing Ragaai was not tackled in the Interior Ministry’s report.

The group appeared in the scene earlier in September, when it published video footage from an attack it executed in August against a security checkpoint in Menoufiya governorate.

The attack left two police officers dead and three others injured, as well as two civilians. The group claimed responsibility for the attack and published related photos.

According to the video, the attack was in response to the massacres that took place when the sit-ins in Rabaa Al-Adaweya and Al-Nahda squares were violently dispersed in 2013, following the ouster of former Muslim Brotherhood president Mohamed Morsi.

In Video: Asssinations target army officers in less than a month