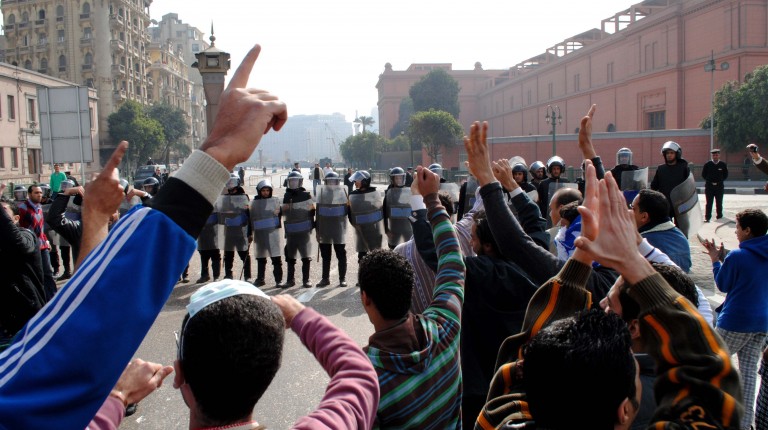 Opposition parties grouped under the Democratic Current are considering a suggestion to call for a general strike on 10 November in objection to the Egyptian pound’s flotation, adopted by the government on Thursday, which was followed by an increase in fuel prices and speculations on other price hikes.

Medhat El-Zahed, leader of the Socialist Popular Alliance party (SPAP), explained that the Democratic Current did not make a final decision on the matter but will discuss it in a meeting, the party said in a Saturday press release.

If a decision comes in favour of the proposal, the Democratic Current will call on people to stay home on 10 November and lift banners which read “No”.

“Parties of the Democratic Current are aligned in their [critical] stance towards the recent economic policies, as well as in supporting the right of the people to peacefully protest,” El-Zahed said.

This comes amid calls launched by an online Facebook campaign named the Ghalaba Movement to protest on 11 November against the regime on grounds of rejecting the wave of price increases.

However, parties in the Democratic Current, which include SPAP, Al-Karama, the Bread and Freedom, and Al-Dostour parties, as well as 6 April Youth Movement, said they rejected the protest calls.

On the other hand, the Free Egyptians party (FEP) launched a counter-initiative to the calls for protest.

In a press conference on Saturday at the FEP’s headquarters in downtown Cairo, the party’s president, Essam Khalil, called for making 12 November a “day to work for the sake of Egypt, in response to 11 November protest calls, so that everyone sees that Egyptians are capable of building and facing vandals.”

FEP has been working with the government and the Egyptian presidency, unlike the Democratic Current, which took a more oppositional stance towards parliamentary elections and the government.

Three things to watch on US election night