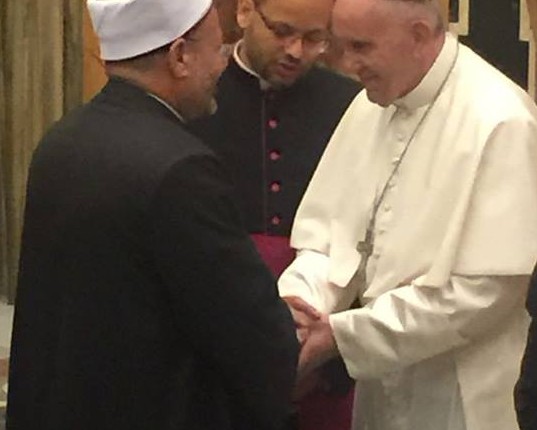 Egypt’s Grand Mufti Shawqy Allam met Pope Francis of the Roman Catholic Church on Thursday during a visit to the Vatican state. While there, Allam attended a conference on commonalities between different religions.

The two-day conference, which was jointly organised by the Pontifical Council for Interreligious Dialogue and the King Abdullah bin Abdulaziz International Centre for Interreligious and Intercultural Dialogue, ran from Thursday to Friday.

According to state-run Akhbar Al-Youm, the grand mufti and his counsel Ibrahim Negm effectively participated in the conference.

During his meeting with the pope, Allam said that Egypt hopes he will visit as soon as possible following an official invitation previously sent by the president.

The visit aimed to send a clear message to all religious fanatics and extremist organisations that leading religious figures are keen to combat any form of terrorism, Akhbar Al-Youm cited Egyptian ambassador to the Vatican Seif Al-Nasr as saying.