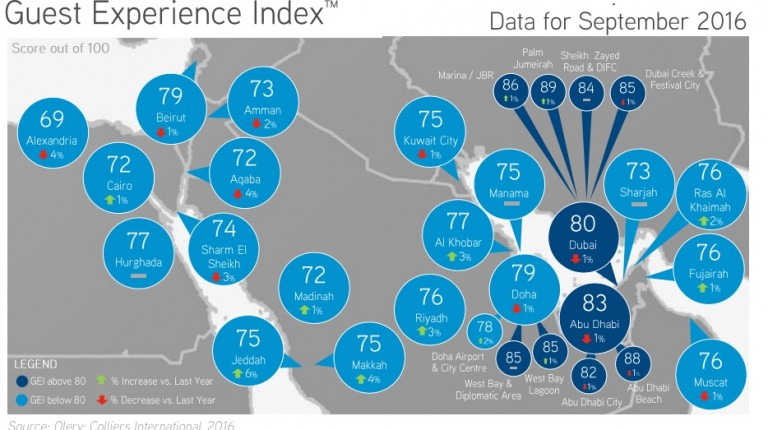 The report showed a decrease in revenues per available rooms (RevPAR) in recreational cities like Hurghada and Sharm El-Sheikh that dropped by 36% and 23% respectively. However, Cairo and Alexandria opposed this trend.

Colliers named Cairo and Alexandria the “Hot Spots” of late 2016. Cairo registered 19% growth in RevPAR due to stable corporate and leisure demand, followed by strong destination marketing and recent political stability, which expected to maintain RevPAR levels above last year.

Colliers said that Alexandria’s continued RevPAR surge, which increased by 12%, is attributed to growing Average Daily Rate (ADR) levels, which over the last six months have been on average 26% higher than the city’s 2015 performance.

As a result, the city’s hotels profitability is expected to increase, according to the report.

The report said that Sharm El-Sheikh continues to feel the repercussions of travel alerts from a number of European feeder markets, adding that British tourist visitation for instance has declined by 70% for the year, as the United Kingdom (UK) travel ban is still upheld.

The report said that Hurghada remains in a situation similar to Sharm El-Sheikh, explaining that hotel operators are hopeful that travel bans for Russia and the UK will be lifted by year-end, following in the footsteps of Germany and Poland.

The report noted that Alexandria experienced the greatest drop in Guest Index Experience (GIE) by 4%, as well as the lowest Guest Experience Index (GEI) score in the region. This is a result of a drop in GEI scores in the 3-stars hotel and hotel apartments segments in 2016.

In the full-year forecast of RevPAR, Cairo and Alexandria are expected to increase by 13% and 12%, respectively, while Sharm El-Sheikh and Hurghada dropped by 54% and 41%.

In its forecast, Hurghada and Sharm El-Sheikh also experienced declines in the GIE ratings due to market conditions.

Cairo hotels to profit despite lack of tourists: Colliers