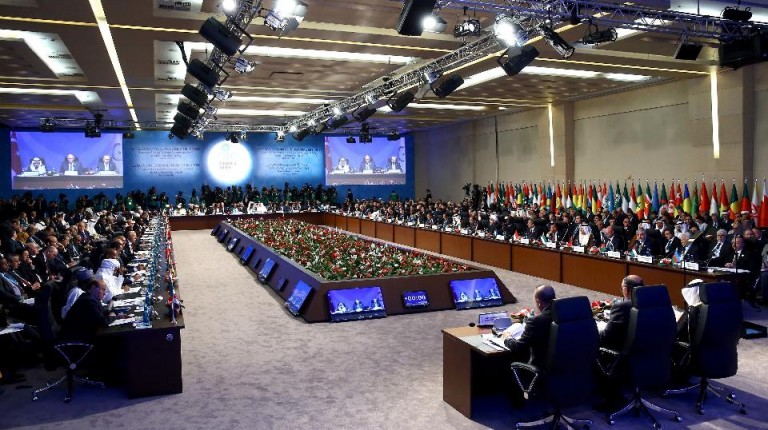 Saudi Arabia’s candidate for the post of secretary general of the Organisation of Islamic Cooperation (OIC) Ahmed Al-Othaymeen praised the Egyptian people and President Abdel Fattah Al-Sisi during his meeting with assistant foreign minister for international institutions and organsiations Hesham Badr.

A statement issued by the Foreign Affairs Ministry said that Al-Othaymeen stressed the importance of enhancing relations between Egypt and OIC. Badr also said that Egypt is satisfied with being in the OIC.

Eyad Madany, former secretary general of the OIC, resigned from his post late October. The organisation issued a statement saying that Madany resigned over health concerns. However, the resignation came a few days after Madany mocked Al-Sisi during his opening speech at a conference in Tunisia. Madany referred to the Tunisian president as Beji Caid Al-Sisi instead of Beji Caid Essebsi. He immediately backtracked from his comments and said that it was a “big mistake”. He went on to say that he is sure that there was more than just water in Essibsi’s refrigerator.

The comment referred to earlier statements made by Al-Sisi during the National Youth Conference when he remarked that he had spent 10 years of his life with nothing but water in his refrigerator and hadn’t complained. Egypt’s Foreign Affairs Ministry severely condemned the statement.

Meanwhile, Saudi oil company Aramco suspended its oil aid to Egypt for the second month in a row. In October, Aramco announced that it suspended its oil aid for one month and the 5-year agreement is still in effect. However, Egypt’s Minister of Petroleum Tarek El-Molla said that the Saudi oil company has informed Egypt that they will suspend the oil aid “until further notice”.

When Aramco announced the suspension decision for the first time, Egypt had just voted in favour of the Russian draft resolution in the United Nations security council; a vote that Saudi’s envoy to the UN described as “painful”.

Although Egypt’s foreign affairs minister previously denied any tension with Saudi Arabia in a press conference, Aramco suspended its oil aid for a second month.

Tension erupted between Egypt and Saudi Arabia earlier in October after the UN security council vote. Saudi Arabia is an ally of the United States, which backed the French draft resolution that was suggested along with the Russian one. The two draft resolutions included key points regarding peace in Syria. However, the Russian resolution didn’t include any clauses regarding the aerial bombardments and airstrikes in Syria. Russia’s airstrikes in Syria have reportedly killed about 4,000 civilians in Syria since they started their operations in May 2015.

Deterioration of Egyptian-Saudi relations is an exaggeration: Nabil Fahmy