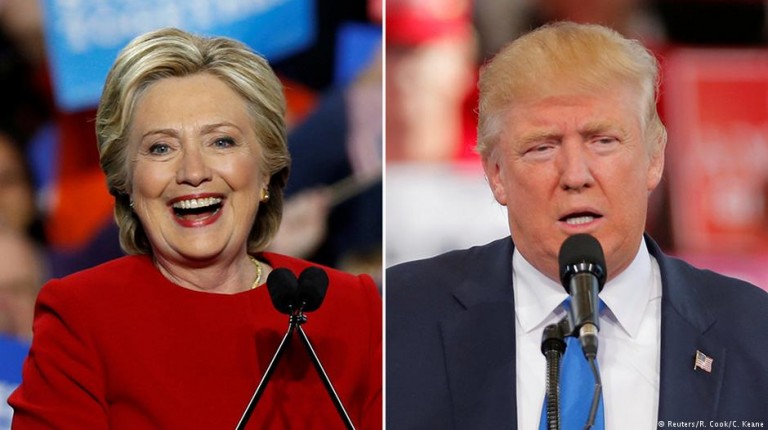 The latest polls have put Hillary Clinton slightly ahead of Donald Trump as the candidates wrap up a round of final rallies. Over 40 million have already cast their ballots as the bitter White House battle nears its end.As per US tradition, the town of Dixville Notch in New Hampshire kicked off voting at midnight (0500 UTC). The rest of the nation was to follow a few hours later as most polling stations opened between 6:00 a.m. and 7:00 a.m. local times.

Democratic candidate Hillary Clinton won in the small community, which reportedly has a population of 12, according to Politico. She took the race with four votes, while Republican nominee Donald Trump won two votes and Gary Johnson one. Mitt Romney – who ran on the 2012 Republican ticket – also won one vote.

Hours before the first polling stations in the US opened for Tuesday's election, polls put Clinton ahead of Trump as both candidates held rallies around the country that lasted into the early morning hours.

A RealClearPolitics average of national polls showed Clinton holding a widening but still narrow 3.2 percentage point lead over Trump in a four-way race with fringe candidates Libertarian Gary Johnson and Jill Stein with the Green Party.

An Economist-YouGov opinion poll of over 3,000 likely voters showed Clinton winning with 45 percent to Trump's 41 percent, with a margin of error of plus or minus 1.7 percentage points.

The Reuters/Ipsos States of the Nation project gave Clinton a 90 percent chance of defeating Trump on Tuesday, but still anticipated tight races in vote-rich states like Michigan and Pennsylvania.

Clinton held the largest rally of her campaign in Philadelphia, Pennsylvania on Monday night, drawing a crowd of some 33,000 according to the city's Fire Department. She was joined by her husband former US President Bill Clinton as well as current President Barack Obama and first lady Michelle Obama. Rock stars Jon Bon Jovi and Bruce Springsteen also played for the cheering Philadelphia crowd.

"There is a clear choice in this election. A choice between division or unity, an economy that works for everyone, or only for those at the top; between strong, steady leadership, or a loose cannon who could put everything at risk," Clinton told the crowd, taking aim at her Republican rival.

"I am with you and I will fight for you and we will win." Trump's final rally of the night was to take place in Grand Rapids, Michigan – a historically Democrat state, but one the Republican candidate was hoping to flip into his column come Tuesday.

Record early voting – and a ballot from space

A record number of US citizens at home, abroad and even in outer space took advantage of early voting measures this year.

According to Associated Press data, at least 43.2 million people cast ballots through the mail or at polling stations ahead of Tuesday. The figure could top 50 million as ballots continued rolling in. The record levels have been reported in 23 states as well as the District of Columbia.

Turnout from Latino voters has surged nationally and may help boost Clinton in Florida – a key swing state for both candidates – while initial numbers for African American voters show a drop-off after historic turnouts in 2008 and 2012 for Obama.

US astronauts have been able to vote from space since 1997, voting in the state of Texas where most of them live near Houston's NASA Mission Control and Johnson Space Center. There was no word on who Kimbrough voted for.

States on the east coast of the US will close their polls around 7 p.m. (0000 UTC). Final results are expected around 11 p.m. EST (0400 UTC) when polling stations on the West Coast close.