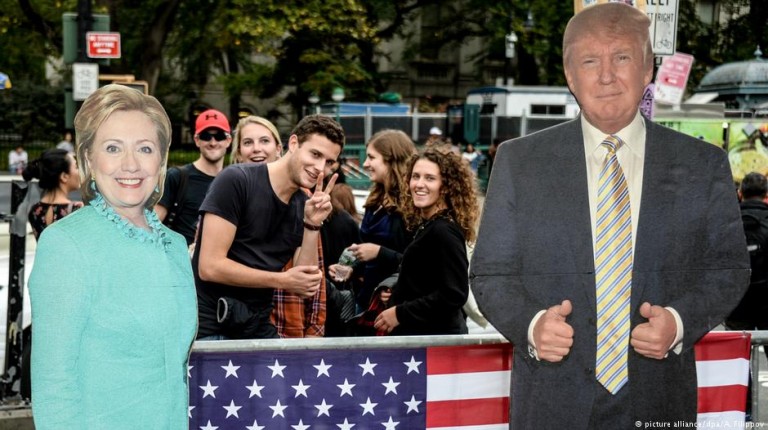 In Brussels, American expats and people from around Europe are eagerly waiting for news on the US elections. The US embassy is meanwhile busy reassuring Europe that all will be well, regardless of who wins.Brian Dunhill's day job is as a financial counselor, an advisor with Cross Border Planning, a wealth management company. But Dunhill's been pulling double-duty as a cross-cultural counselor outside the office lately – as president of the American Club of Brussels.

Dunhill is spending a lot of time trying to help Europeans understand the dynamics of Donald Trump vs. Hillary Clinton, something that's difficult for anyone to track. "They're just looking for answers at this point on how we got here," Dunhill told DW, recalling Mark Twain's quote that the difference between fact and fiction is that fiction has to be believable. In the U.S. presidential race this year, he marveled, "there have been so many twists and turns that if this were a Hollywood movie, you wouldn't believe it."

Dunhill will be front and center Tuesday night, helping organize the biggest election-night event in Brussels, where more than a thousand people will assemble at the Marriott Hotel on the Grand Place to basically wait out what appears to the closest election since – well, since that whole "hanging chad" affair in 2000.

The gala co-hosted by the American Club and The Bulletin, an expat news and cultural website, will feature a VIP dinner including intellectual discussion about what the election outcome will mean for NATO and European Union relations with a new administration. There will be a debate between representatives of Republicans Overseas, whose membership numbers in Europe are unclear – possibly only one or two in Brussels- and Democrats Abroad. Though there are more than 11,000 Americans registered as residents of Belgium, most of those who'll gather to watch the results are expected to be from other countries.

Dunhill quips that Americans are the only people in town now who don't want to talk about the election. But he says the Europeans are taking the race incredibly seriously, traumatized by Trump's non-transatlanticist views, but also looking in the mirror. "It's all the same issues that every single developed nation here in Europe is going through," Dunhill pointed out. "So it's not so far-fetched that it could be a precursor to what we could see with the French election and German election and what we already saw in Poland and in England."

Dunhill's co-organizer Sarah Crew, an editor with The Bulletin, says she's not surprised by the massive interest. "Brussels is a political city," she said, noting that even in previous years the turnout for this event has been overwhelming. Registration was cut off at 1,000 tickets, which sold out quickly online, and no one will be able to buy a ticket at the door this year. The specter of terror attacks has added a layer of logistical concern, with attendees asked not to bring backpacks or other bags and organizers vigilant to keep lines from forming outside.
Crew has helped host these election-night parties since they started in Brussels in 2004. She says the difference in the political atmosphere between this year and 2008, when Barack Obama first ran, is stark. "There was a very symbolic feeling about electing the first black president," she said, "and this has been such a different election from the beginning. It's just been so negative."

Personally, Crew says, she also regrets that there has not been a similar groundswell of positive energy for breaking another glass ceiling and potentially electing the first female U.S. president, which she calls a "real shame".

Crew, who has dual British-Belgian nationality, said everyone she knows is worried and the shock outcome of the Brexit vote has exacerbated that because of the parallels between the two campaigns – what Crew called the "anti-establishment, anti-government feeling" amongst a large part of the population.

But she echoed Dunhill in saying that much of the European sentiment is simply bewilderment. "It does seem strange to us," she said, "that somebody who's not a politician, somebody who so lacks political experience, who's like a joke TV figure" may be the next US president. At this point, no one can say for certain that's not going to happen.

Counting the minutes til morning or mourning

European commentators and opinion leaders are expected to be out early Wednesday with reactions, whether or not they've stayed up all night. The European Parliament's (EP) audiovisual department has notified journalists it will be providing lawmakers with facilities to give interviews; some press offices are offering overnight spokespeople. EP President Martin Schulz will be "available" from 0700 Brussels time and is expected to release an early statement.

At NATO headquarters, the media team says Secretary General Jens Stoltenberg will receive regular updates overnight and will have something to say early Wednesday.

Starting at 4 a.m. Brussels time, the US mission to Belgium will be hosting journalists to watch final results roll in and the American ambassadors, to Belgium, the EU and NATO will join them. Ambassador Doug Lute in particular has spent plenty of time reassuring NATO that regardless of Trump rhetoric, the US will not abandon its obligations under the collective security mantle.

Even with Clinton holding a slight lead heading into voting day, one prominent Brussels-based Democrat told DW she was so nervous she was physically ill. In this city, Donald Trump has described as a "hellhole", it's going to be a long night.

Three things to watch on US election night