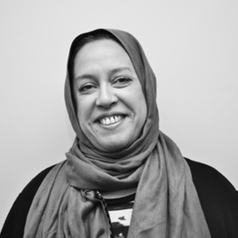 Can a woman winning the White House change history for Egyptian women? Over the past year, I have been addressing this question with female Egyptian intellectuals in Cairo.

Before discussing the intellectual women’s view of the US election, it is worth keeping in mind that only around 28% of Egyptians go to university. So most of the women I talked to do not necessarily represent average Egyptians.

And for many such Egyptian women, the American presidential race and the gender of the coming president is not a big issue. The US will always be a distant, rich country that is trying to control our lives and represent itself as a dream for our youth.

When I tried to discuss the issue with a female clerk working in the Egyptian bureaucracy, she looked at me with a fading smile and said: “Do you really think they would allow her to become a president?” When I asked her who she meant by “they”, she simply said: “everyone”.

She added sarcastically: “It would be good to have a woman as [the] American president, maybe she [will] decide after all to mind her own business and leave us alone.”

A strong woman, but is she a feminist?

Based on the number of interviews conducted with colleagues and activists, it seems that although Egyptian intellectuals see Hillary Clinton as a strong female candidate, they do not necessarily perceive her as a strong feminist. This belief is reflective of some views in the US, as American women have pointed out.

Although Clinton condemned the violence and rape against women that were reported in Tahrir Square during the Arab Spring, she is still not perceived as a feminist when it comes to Egypt.

Some view her political positions as another way to undermine women in the region. For them, Clinton is a representative of neoliberal policies and institutions, which do not help the poor in the region, of whom women make up a large percentage.

No doubt Clinton, and her team, have consistently opposed the sexist comments made by her opponent, Donald Trump. But her overall performance during the campaign means that for many, she is simply another candidate of the establishment.

In other words, her ascendancy to the presidency will not bring much change to existing levels of support for human rights and gender justice. Of course, on that level, Trump would not bring any hope either.

Given the current context of the American-Egyptian relationship, there is a tendency to fear this status quo.

For the past five years, the Middle East has faced very serious challenges. Political stagnation and economic hardship led to the Arab Spring.

While Tunisia seems to be doing relatively well on the road to democratisation, Egypt has gone into reverse. Syria and Libya are on the verge of collapse.

Egyptians, and women in particular, remember celebrating the cheerful statements made by President Barack Obama and his administration in the early months of the revolution in 2011. They also have in mind the more critical comments made against the current regime under President Al-Sisi.

Nevertheless, women I met are fully aware that in both cases it was mainly paying lip service to “democracy” without any real help towards pushing democratisation any further.

Would it make a difference, in this regard, to have a female president? Reading through the previous experience of Clinton during her time as secretary of state in 2009-2013 supports my friend’s conclusion.

During those difficult years, Clinton was keener to secure stability than promote democracy. A few months ago, the Washington Post ran a piece on Clinton’s evaluation of the demonstration in Tahrir square back in 2011. As Clinton herself wrote in her memoirs, she preferred a policy of encouraging former president Hosni Mubarak to accept a gradual transition of power, rather than pushing him to resign–the demands of millions of Egyptians in Tahrir square and elsewhere in Egypt. The author of the Washington Post article argues that this was the right policy; millions of Egyptians would disagree.

“She is an integrated part of the institution and can’t break with the established rules, neither on the domestic nor the international level,” a friend said when comparing her to her earlier Democratic challenger, Bernie Sanders, who was portrayed in Egypt as a fresh and different perspective on the American political scene.

The lesser of two evils

There is one important point in Clinton’s favour among Egyptian women. She becomes a much more favourable candidate when we consider that the other option is Donald Trump with his endless ability to make new enemies every time he makes a public appearance.

I recently discussed the US presidential elections at an event with a couple of female university professors. One of them made a very important comment about the shift in the race from the primaries to the final election campaign.

During the early stages, the question about the gender of the candidate was crucial. Many observers in Egypt, just like the clerk I spoke to earlier, believed that Clinton might not have a chance just because she is a woman. The popular belief was that a strong male candidate would have been a better option. Some thought that if the Democratic Party ended up with her as its candidate, this would mean the loss of the election.

Now, Clinton is the only person capable of stopping Trump. Supporting her in the election is no longer a choice based on gender sensitivity or a triumph of the feminist cause, rather it is a convenient choice between the lesser of two evils.

Clinton seems capable of winning the election. If she does, Americans will be breaking another taboo about the presidency, having elected a biracial president in 2008 and 2012, followed by a woman.

There is no doubt that in some ways, a woman in the White House will have a positive impact on young women around the world, even if she is not considered a feminist by all. A new window would open with her ruling one of the most powerful countries in modern times. Her success will empower and enhance women around the globe. The glass ceiling will not just be smashed in the United States, but in other countries worldwide.

Whether they were critical or supportive of Clinton, all my interviewees agreed that the coming decades are full of promises as much as challenges for women in the US, Egypt and the world.

Amal Hamada is an assistant professor of political science at Cairo University.