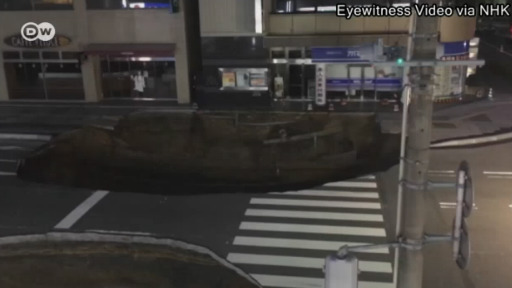 A giant sinkhole has opened up in the middle of a five-lane road in Japan, consuming a busy thoroughfare. Television footage showed two separate holes steadily expanding in front of the city’s railway station.A gaping 15-meter (50-foot) deep sinkhole opened up at 5:15 a.m. Tuesday (2015 UTC Monday), exposing support columns of nearby buildings at a traffic intersection in the southern city of Fukuoka, prompting fears of further collapses and mass evacuations.

Witnesses described a scene out of a disaster movie. "It was a bit dark outside, and my first impression was, 'Is the road really falling?'" an unnamed young man told Japan's public broadcaster NHK. "When I saw it, two holes were already there, and they continued to grow bigger. I got scared the most when a traffic light fell at an intersection close to where I was standing. I felt, 'I have to get out of here.'"

The sinkhole continued to expand and by mid-morning was around two stories deep, filling with water from broken pipes. Police cordoned off the area and evacuated local buildings; there have been no reports of injuries.

Authorities in Fukuoka – about 1,065 kilometers (662 miles) from Tokyo – said the cause of the collapse in the city's Hakata district is under investigation, but linked it to ongoing subway construction nearby. A smaller sinkhole occurred in the city of about 1.5 million in 2014 at another location of the subway construction.

Japanese-Russian ties: Is Tokyo bound to be disappointed?