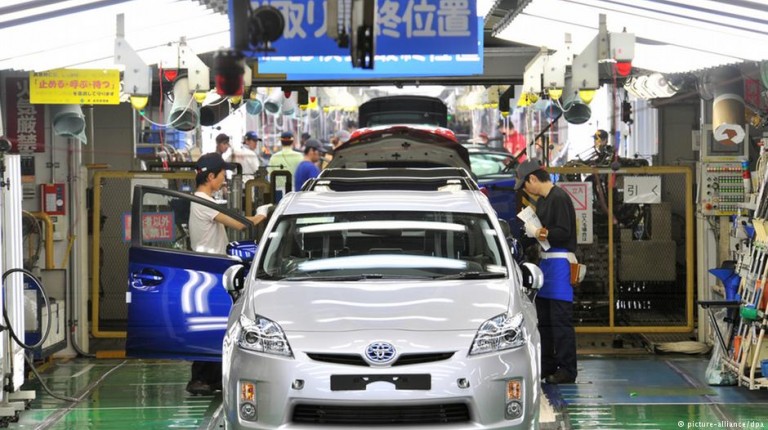 Toyota’s bottom-line profit has taken a dive in the first half of the Japanese carmaker’s fiscal year. Lower demand in North America, but above all a stronger yen were behind the marked drop in earnings.Toyota announced Tuesday its April-September net profit fell by 25 percent year on year. The world's largest carmaker by sales reported bottom-line earnings of $9.1 billion (8.2 billion euros) in the first half of its fiscal year.

Operating profit dropped by nearly 30 percent, while revenue shrank by 7.2 percent in the period under review.

The marked decline in half-year earnings underscored the negative impact that a resurgent national currency had had on Japanese firms doing much of their business abroad.

Japan's exporters used to reap windfall profits over the past few years as government efforts to crank up the world's third-largest economy sharply weakened the yen.

But the currency had rallied since the start of 2016 as volatile equity markets and Britain's vote to leave the European Union boosted demand for a unit widely considered to be a safe investment.

Toyota's vehicle sales ticked up to 5.06 million units in the April-to-September period, from 4.97 million vehicles in the same period a year earlier.

The Japanese carmaker experienced bigger demand in Japan itself, but also in other Asian nations and across Europe.

By contrast, vehicle sales fell in the Middle East, Africa and above all in the key North American market where cheap oil impacted customers' appetite for Toyota's fuel-efficient models including the Prius.