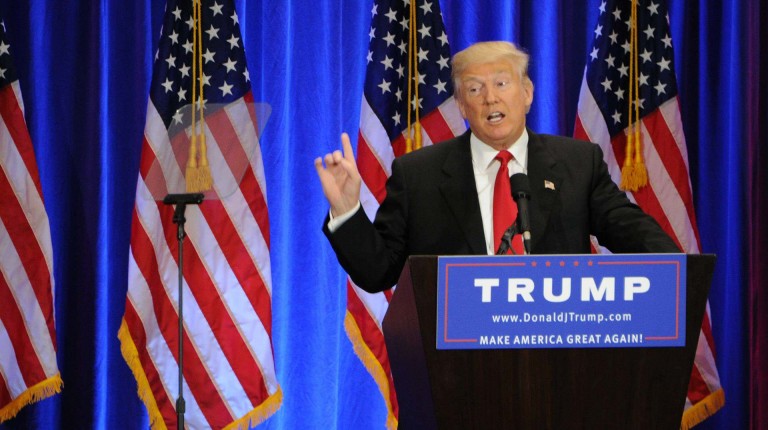 Following a heated, bitter battle for the top government seat in the US between Republican Donald Trump and Democrat Hillary Clinton, the US concluded its elections on Wednesday by announcing Trump as its 45th president.

Protests reportedly erupted across the US following the announcement. Protesters chanted “Trump not my President”. Unlike most of the forecasts put out by American media outlets on voting day, Trump seized a victory in a race Clinton was poised to win.

Shortly after the results were announced, Trump gave a speech, saying that Clinton called him to concede and congratulate him on winning the elections. Trump said that it was not an easy race, adding that Clinton fought very hard in her campaign.

Standing at a podium in front of his supporters, Trump said that it’s about time for the US people to unite and “bind the wounds of division”, pledging that he will be a president for all Americans. He further added that he will join hands with those who are ready to cooperate with him, saying that he has a “great economic plan”, and America will have the strongest economy in the world.

The president-elect also noted that this political stuff is “nasty” and tough.

Given the suggestions and statements made by Trump while campaigning, it is likely that US foreign policy will change once his administration takes over the oval office, particularly US relations with countries in the Middle East.

How will the results of the US elections affect Egypt?

The bilateral relations between Egypt and the US have strained over the past few years, particularly after the Egyptian Armed Forces ousted former president Mohamed Morsi from his position.

The Democratic Party has described Morsi’s ouster as a military coup. On the other side of the isle, Trump has noted his opposition towards political Islam, leading speculators to believe that he may get along well with President Abdel Fattah Al-Sisi as they both share the same strategy of combating terrorism in the region.

Professor of political science Hassan Nafaa told Daily News Egypt that the foreign policy of the US will change when Trump takes office. He said that Egypt is poised to replace Saudi Arabia as a key power in the Middle East.

Nafaa added that a major bulk of US citizens was not satisfied with the policies of US president Barack Obama regarding globalisation, immigration, and terrorism. He was accused of turning a blind eye to these issues, and there was also discontent with some of his domestic policies. This is why Trump was elected as president, said Nafaa.

Nafaa further said that Trump will relentlessly fight terrorism and could become alienated alongside Russia. Bilateral relations between the US and Egypt will reform and grow stronger; however, relations between the US and Gulf countries, particularly Saudi Arabia, will grow worse. Unlike the current administration, Trump will not support the extremist groups that were created by Saudi Arabia and Gulf countries.

The political science professor further added that Trump will terminate all relations with Iran, which eradicates the long fought over nuclear agreement between the two countries that caused tension with Israel. Iranian president Hassan Rouhani said in a statement following the results that the outcome will have no effect whatsoever on the policies of Iran, adding that Iran’s expansion of economic relations is not debatable. Nafaa concluded by saying that relations between Egypt and the US will thrive and there will likely be an agreement on the situation in Syria.

Nader El-Sharkawy, the secretary general of the Free Egyptians Party (FEP), sees Trump’s presidency as a better alternative for Egypt, given that the new American president had previously expressed support for his Egyptian counterpart.

Moreover, El-Sharkawy highlighted Trump’s rejection of the Muslim Brotherhood, which was outlawed by Egyptian authorities. According to El-Sharkawy, “ unlike polls’ predictions, Trump was able to attract more voters towards the right wing by playing on the fear of terrorism.”

Commenting on Trump’s controversial statements on Arabs and Muslims, El-Sharkawy argued that there is a difference between Trump the candidate, who was acting on his personal volition, and Trump the US president, bound by the rule of institutions, constitution, and laws.

“Now the entire congress will be controlled by the Republicans, which I find more realistic when dealing with the Middle East and approaching terrorism. There’s going to be a boycott of relations with Iran, maybe a softer approach to the Syrian crisis, but we will have to wait and see how the strategic alliance with Saudi Arabia will develop,” El-Sharkawy said in comments to Daily News Egypt on Wednesday.

El-Sharkawy had followed polls expecting the victory of rival candidate Hillary Clinton, which according to him failed to properly assess the presidential race by following traditional methods of data collection which did not take the general mood of Americans into consideration.

On the other hand, Farid Zahran, head of the Egyptian Social Democratic Party (ESDP) was much more sceptical of Trump’s intentions towards the Middle East.

“Trump is known for his anti-Islamic and anti-Arab stance, even if at some point he retracted some of his outrageous comments for calculations related to the electoral process,” Zahran told Daily News Egypt on Wednesday.

To Zahran, Trump’s victory will reinforce worldwide racism and polarisation, although he said he hoped that US institutions will be able to control some of Trump’s “wildness”.

“It would be a mistake to celebrate Trump’s hostility towards Islamist extremism, even if he helps a particular force or country in the Middle East in countering terrorism, because he does not differentiate between Islamist extremism and Muslims or Arabs in general,” Zahran reasoned.

Referring to the George W. Bush administration, Zahran stated that US policies led to the division of Iraq. “The world is involved in wars related to ethnicity and sectarianism and that is only going to get worse, unless efforts are made on an international level by democratic political forces and humanitarian groups,” he said.

To Zahran, the new Trump administration will feature no radical changes to existing Republican beliefs, but on the long-run such policies will negatively affect the Middle East.

Political analyst Saeed Sadek said that Trump’s winning is good news for some countries in the Middle East; however, it is bad news for most of the Gulf countries. As for Egypt, Sadek said that Al-Sisi was the first to congratulate Trump for taking office as president, as they both share the same vision of combating terrorism. Sadek also added that Trump is bad news for the Muslim Brotherhood and political Islam in the Middle East in general.

Sadek said that during Trump’s meeting with Al-Sisi, both agreed on the importance of combating terrorism in the region, unlike Clinton who focused on the human rights situation and its deterioration in Egypt.

Regarding the situation in Syria, Sadek said that Trump is supporting Syrian president Bashar Al-Assad in his war, and sides with the Russians, and that’s what will create problems with Gulf countries, including Saudi Arabia, which sides with the Syrian opposition.

According to Sadek, under Trump’s administration and with the Republicans taking over the congress, this bill may pass and further increase pressure on Saudi Arabia. He concluded by saying that Saudi Arabian King Salman bin Abdulaziz Al-Saud congratulated Trump on winning too late.

What will change in Syria under Trump’s administration?

The US wasn’t on good terms with Russia over peace solutions in Syria, and both adopted different policies. Trump has stated that Russia is more flexible towards achieving change in Syria, demonstrating a supportive attitude towards Russian airstrikes on Syria. As the president-elect, Trump is expected to shift US policy towards being supportive of Syrian president Bashar Al-Assad.

Syrian political analyst Tayseer Al-Naggar told Daily News Egypt that for the Syrian people, it doesn’t matter who made it to the oval office because the US was never fully transparent regarding its stance on Syria. He added that it is well-known that the western world supports human rights, but what happens in reality doesn’t match these claims.

Al-Naggar added that the US currently opposes what Russia is doing in Syria, but that it doesn’t act on that position, further stating that Trump’s support for Russia’s actions in the Syria conflict comes as no surprise for a US policy that was quiet about its so-called opposition to mass killings in the country. He further added that people who wanted Clinton to win weren’t assessing the situation the right way, and the same goes for those who opposed Trump winning.

Al-Naggar concluded saying that if America really supported the Syrian people, it could have supported them with arms, but they don’t really care about Syria.

Is Palestine clinging to a false hope?

The spokesperson of the Palestinian presidency, Nabil Abu Rudeineh, issued a statement following Trump’s win, in which he said that Palestine will work with any American president who will seek a two-state solution to the Palestinian-Israeli conflict.

Mohamed Gomaa told Daily News Egypt that it doesn’t matter who won the elections, because the Palestinian file will not be affected. However, he stressed that Clinton’s winning “could have triggered” peace talks in the Palestinian-Israeli file, but all of it would have been empty words with no real action.

However, Gomaa said that none of the candidates would have pressured Israel to reach a solution.