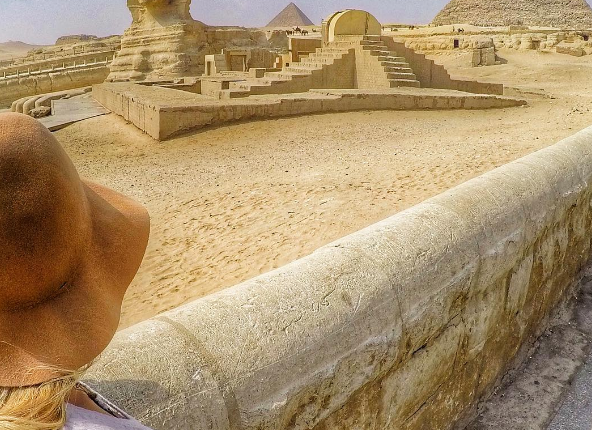 “I traveled to Egypt, and yes, it was safe”—this is how American blogger Alyssa Ramos started her article, published in Huffington Post on 28 October, aiming to encourage foreigners to visit Egypt in neglect of all the warnings they may hear in international media outlets about Egypt’s instability. Ramos is known for being an independent travel-blogger who has travelled to about 44 countries.

Along with the opinion article, she published a group of photos she took in different touristic spots in Egypt, including the Pyramids in Giza, Abu Simbel and Karnak temples in Luxor, hot air balloons in Aswan, and scuba diving in Hurghada. The article and the photos raised waves of praise on social media as they grabbed the attention of dozens of Egyptians and foreigners who showed their gratitude for Ramos as one of the few who decided to convey a real image about what is happening in Egypt.

“I realised that all of the people telling me that Egypt was unsafe hadn’t even been there. News reporters for one, had never reported their negative findings about Egypt from there. They reported what they were told to say from a box in the US. That, my friends, is what I like to call false advertisement,” Ramos wrote in her article.

She emphasised that the conditions were bad years ago during the revolution, but the government is taking extreme measures nowadays to make tourists feel safe again. On her blog “My life’s a movie”, she posted another article entitled “How to see Egypt in a week for cheap” in which she gave tips for tourists on how to schedule their short visits to Egypt and deal with sellers in the tourist areas.

“Don’t chit-chat with people selling stuff—it’s nice to say hi, but ultimately they’re trying to suck you into accidentally buying something, and know that camel rides should not cost more than EGP 100,” she wrote.

She also emphasised that Americans used to dominate the tourism demographics in Egypt before it got “such a bad name”. “But since we are all so easily persuaded by what we hear, it was sadly very easy to single-handedly discourage an entire nation from visiting this country. Egypt has not seen much of a decline in tourism from any other country, but ours. And that’s honestly part of the reason why I went there,” she added.

Therefore, she advised Americans to turn off Fox News and CNN, and question what they publish about Egypt’s internal affairs. “Please realise that negative news and fear mongering are what drive ratings. This makes my job extra hard since I’m just a little solo female travel blogger against the big bad mainstream media,” she concluded.