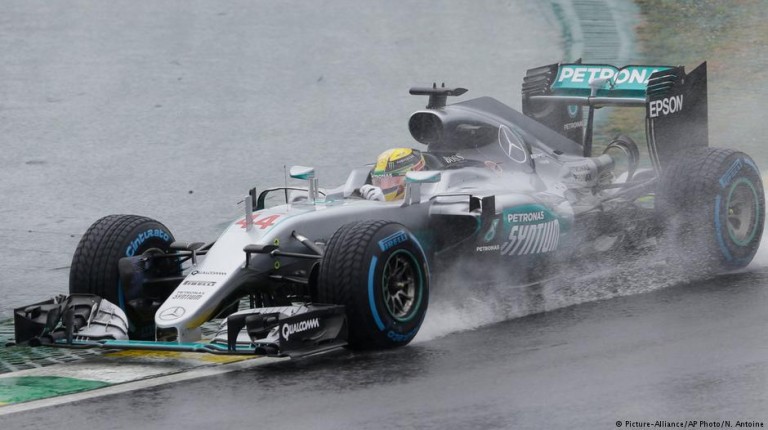 Lewis Hamilton has won the Brazilian Grand Prix for the first time in his F1 career, keeping the 2016 title race alive in the process. Nico Rosberg was second in the pouring rain, while Max Verstappen put on a show.Multiple safety car periods, starts and re-starts, red flags, and dozens of spins, crashes and near-misses. Lewis Hamilton kept out of trouble at the front in a chaotic wet race at Interlagos on Sunday, securing a necessary victory to keep his world championship hopes intact. Hamilton led from start to finish in a race that took almost three-and-a-half hours including several stoppages owing to crashes in the difficult conditions.

Nico Rosberg finished second, rarely looking like a threat to Hamilton but limiting the damage inflicted by his teammate's triumph, and preserving his world championship lead at 12 points going into the final race in Abu Dhabi. A win carries 25 points.

"Of course in Abu Dhabi I'm going to give everything," Hamilton said on the winner's podium. "But right now, I'd just like to live in the moment." The Brit had never won in Brazil in 10 attempts prior to Sunday's race.

At all three of the race's rolling starts, Rosberg failed to be close enough to pole-sitter Hamilton to challenge into the first corner, and then appeared content to track his teammate from a distance on the treacherous track. His second position looked in serious jeopardy around two-thirds distance from Max Verstappen, but Red Bull's young charger suffered a major setback when he had to make extra pit stops to re-fit wet weather tires.

This meant Verstappen dropped from the second place he had claimed on track from Rosberg – overtaking him around the outside of turn 3 – way back into the midfield with only a handful of laps remaining. However, the Dutchman showed just as much pace once back out on track. He sliced past a dozen cars in as many laps to still finish third overall.

Crashes galore, even before the race began

Perhaps the presence of Guns N' Roses guitarist Slash, fresh from a Sao Paulo concert on Saturday, in the paddock should have sounded the November Rain alarm bells.

Another early warning about the wet weather came 20 minutes before the race began, when Haas F1's Romain Grosjean crashed into the wall on his way round to line up on the grid, doing enough damage that he could not start the race. In Grosjean's defense, he complained of a problem with the engine over team radio, with the TV footage making it sound as if the engine had cut out altogether.

During the course of the race, the weather claimed younger and older scalps alike. Jolyon Palmer even managed to crash his Renault into Danill Kvyat, retiring as a result of the damage, under safety car conditions. The uphill climb at the end of the lap, a fast set of sweeping left-handers, was claiming the casualties. Marcus Ericcson, Kimi Raikkonen, Felipe Massa and Estean Gutierrez all ended up in the wall on the approach to the pit lane entry.

Raikkonen's crash was particularly dangerous, as he spun on one of the attempted re-starts while running third, with the chasing pack all miraculously missing his Ferrari on the way through, preventing a major pile-up. Carlos Sainz and Sebastian Ocon had particularly little time to react.

Massa's crash was an unfortunate end to a special day for the local hero – competing with a special livery, helmet and overalls in his last ever home grand prix. Massa waved at length to the crowd from next to his stricken Williams, before walking back to a string of embraces, hugs and handshakes in the pit lane – also from members of his former teams Ferrari and Sauber. His wife and son were also on hand for a hug after his race ended around 20 laps ahead of schedule.

Sebastian Vettel finished fifth for Ferrari despite a couple of major scares during the race, with Carlos Sainz sixth and Nico Hülkenberg an impressive seventh – no doubt wondering what might have been but for a puncture mid-race that forced him to give up fourth position. Daniel Ricciardo was eighth for Red Bull after a difficult afternoon seeking the right tires for the conditions.

The crazy weather provided backmarkers with a chance to shine and score some crucial world championship points, an opportunity Sauber seem to have used to dodge the dubious honor of finishing last in the teams' championship.

Brazilian Felipe Nasr held on to finish 9th for the Swiss outfit – scoring Sauber two championship points and allowing them to leapfrog Manor (with 1 point so far this season) at the very foot of the championship.

Despite both Manors, driven by youngsters Pascal Wehrlein and Esteban Ocon, running in points positions for much of the race, they faded in the final stages to finish 12th and 15th. Teams receive prize money from F1 on the basis of their points, and being among the top 10 constructors would provide an important financial boost for Sauber for 2017.

Lap-by-lap coverage from the race can be seen below.