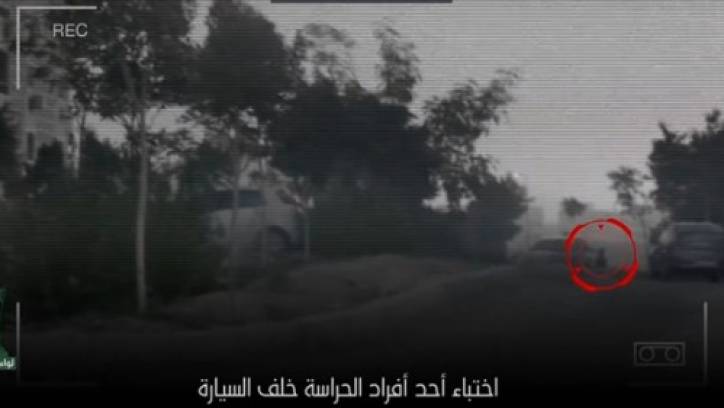 The beginning of the eight-minute video shows alleged violations by army forces, such as the demolition of houses. A photo of Ragaai with other army personnel is shown, in reference to his responsibility for violations. This photo is believed to have been taken when Ragaai led a battalion assigned to destroy tunnels between the Gaza strip and Egypt.

In the early hours of 22 October, anonymous army sources told Daily News Egypt that Ragaai was assassinated at dawn in front of his residence in El-Obour city, a Cairo suburb.

In 2014, the major was assigned to undertake several military tasks in North Sinai. In the video, Lewaa El-Thawra cited complaints by residents in the governorate and older footage of the army allegedly abusing residents.

The militants also referred to violations by army forces in North Sinai since the ouster of former Islamist president Mohamed Morsi in 2013. They alleged that the army had destroyed 2,577 homes, killed 1,523 residents, and forcefully displaced 27,000 people.

Other clips shown in the video are army tanks facing protestors with the sound of shooting in the background, and more clips of the army deployed around Cairo.

In the video, the militant group accuses Ragaai of being responsible for killing hundreds and detaining thousands in Sinai, as well as Cairo when he was occasionally assigned to secure vital squares in the capital. They also accused the major and his division of storming universities.

Then the video showed photos of a number of leading Muslim Brotherhood figures who have been killed during military confrontations with the police, according to the narrative of the Ministry of Interior.

Mohamed Kamal was accused by the ministry of supervising a military wing of the Brotherhood. The video cited the extra-judicial killing of Kamal as a trigger for the assassination of Ragaai.

The group’s reference to these leading figures from the Brotherhood raises questions about the true affiliation of Lewaa El-Thawra, despite the group’s claims that it operates solely to “restore the stolen [25 January] Revolution”.

The group also referenced the killing of Kamal in a print statement released directly following the assassination of Ragaai. When this statement was issued, Islamic Movements expert Ahmed Atta told Daily News Egypt that Lewaa El-Thawra is the military wing of the Brotherhood, but is not related to “Sinai Province”. He argued that the group’s mention of Kamal is a clear sign.

The video detailed the assassination operation. A masked man said that the group monitored Ragaai’s movements from his residence to any destination. “Lewaa El-Thawra’s leadership council found that the criminal Ragaai is accompanied by a driver and a personal guard who is armed with an AK-47 on a regular basis. They use a white four-wheel drive,” the masked man said.

The leadership council then ordered members of the group’s military wing to execute the major on 22 October at dawn, according to the video. Scenes from the assassination were captured by one of the members from a vehicle. The major did not appear in the selected scenes; rather, the camera was focused on the two militants who carried out the assassination.

According to the video, the militants parked near Ragaai’s home and two of them left the vehicle, opening fire against the major, who was injured. The second militant then shot Ragaai between the eyes. The two militants then inspected the four-wheel vehicle and seized two AK-47s and other personal belongings before fleeing the scene.

Lewaa El-Thawra concluded the video message by saying that no military funeral was held for Ragaai as the security apparatuses were not sure they would be able to secure it.

At the beginning of November, the Interior Ministry announced that Brotherhood-affiliated militants had been arrested, including from Lewaa El-Thawra. The ministry said it arrested the perpetrators of the failed assassination attempt against Egypt’s former Grand Mufti Ali Gomaa and other operations.

Despite broadcasting alleged Lewaa El-Thawra militants confessing to the attempt on Gomaa’s life, the ministry has not mentioned any details about the group’s claimed responsibility for the murder of Ragaai.

Lewaa El-Thawra remains a relatively unknown group. Its first activities surfaced in September when it released footage of an attack from August against a security checkpoint in Menoufiya governorate. The attack left two police officers dead and three others injured, as well as two civilians. The group claimed responsibility for the attack and published related photos.

In video footage published on the group’s Twitter account, assailants are shown approaching the checkpoint in a car. Upon arrival, one of them exits the car with a gun and opens fire on the non-commissioned police officer standing in front of the checkpoint.

According to the video, the attack was in response to the massacres that took place when the sit-ins in Rabaa Al-Adaweya and Al-Nahda squares were violently dispersed in 2013, following the ouster of Morsi.

Contrary to videos released by “Sinai Province”, the video by Lewaa El-Thawra carried the clear message that the attack was in response to the current regime’s betrayal of the people’s aspirations for the 25 January Revolution. This point is not included or admitted in any “Sinai Province” ideology.