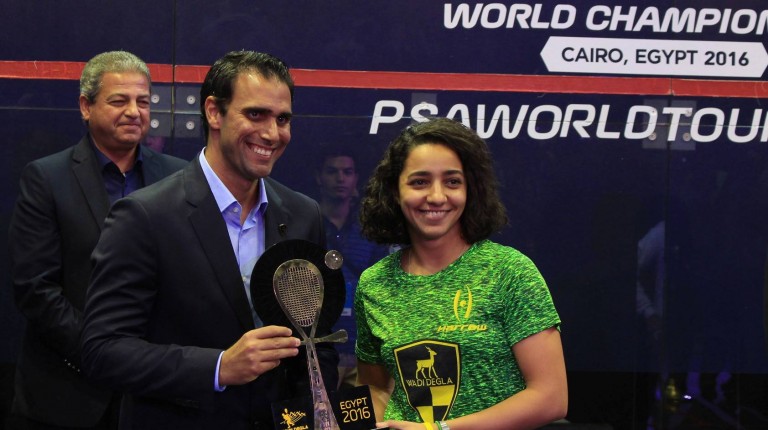 In September 2015, El Welily, who plays for Wadi Degla Clubs, made it all the way to the top to be ranked first internationally. She remained in first place from September 2015 to December 2015.

At the Al-Ahram Squash Open, which took place in Egypt from 19-23 September, El Welily defeated her compatriot Nour El-Sherbiny, ranked first internationally, in the final match.  The result was 3-2 (11-5/11-9/9-11/9-11/11-7) in El Welily’s favour. This resulted in El-Welily winning the Al-Ahram Squash Open, a prestigious championship, which had not been in operation for 10 years.

Less than two months later, El Welily won the Wadi Degla International Women’s Squash Open. This came after she defeated her compatriot Nouran Gohar, ranked third internationally, in the final match with a score of 3-1 (11-8/7-11/11-4/11-5).

Tell us about your performance level prior to the Al-Ahram Squash Open?

Before the Al-Ahram Squash Open, I performed poorly in Hong Kong and China, and I was not satisfied with myself throughout the last season. As I started the season like this, I was afraid that it would end similarly. However, at the end of the season, in February, I improved a lot.

So Al-Ahram Squash Open was an opportunity for you to regain your success?

Also bear in mind that winning the Al-Ahram Squash Open, a championship that is celebrated in my country, and being surrounded by my family and people, means a lot.

How about your performance at the US Open, which was held after the Al-Ahram Squash Open?

I played very well in the first three matches. When I played in the semifinal against Nour El-Sherbiny, I lost and was not satisfied with my performance.

Afterwards, when you met Nour El-Sherbiny at the Al-Ahram Sqaush Open final, were you not a bit worried?

No. After meeting Nour El-Sherbiny at the US Open, I played two matches very good, so mentally my mind was clear.

Is it stressful to perform in a championship in Egypt, where the audience is focusing on you?

It is stressful, but also motivating as my family and the audience cheer me on. Also, keep in mind that Egyptian female squash champions Nour El-Sherbiny and Nouran Gohar are higher than me in the PSA’s ranking, which means that the focus is not on me as before.

My only problem is myself; I am the one who stresses myself out and I am also the one who can remove this stress. I try as much as I can to free myself from worry and not to be anxious all the time.

How do you feel playing at Wadi Degla Clubs?

It is always amazing as the audience cheers me on and I love the atmosphere.

What other challenges do you face playing squash?

Each period has its difficulties. Currently, my ranking has dropped from first to fourth. This happened in one year, so there is no pressure on me. I just train and then apply what I have trained for.

Why did your rank drop?

This happened due to the results. But it does not bother me that much, as the ranking always changes. If you contemplate the ranking of the top 10, you will see that it is in constant flux.

Any plans to regain your seat as first internationally?

Of course, I hope for this to happen, but I think about this in terms of the tournaments, in which I participate one after another. When I have good end results in a tournament, my rank will subsequently improve.

Who is your strongest competitor?

When I enter a championship, from the first match until the last one, all of my opponents are competitors. I never underestimate a player’s ability.

Who is your idol in the sport?

My idols are Egyptian champion Amr Shabana and Australian female champion Rachael Grinham. She was ranked first internationally and remained in the top 10 of PSA’s ranking for a long time. Whether on the professional or the personal level, she is amazing and so modest.

And what are your current goals?

In each and every match I try to do the best I can.