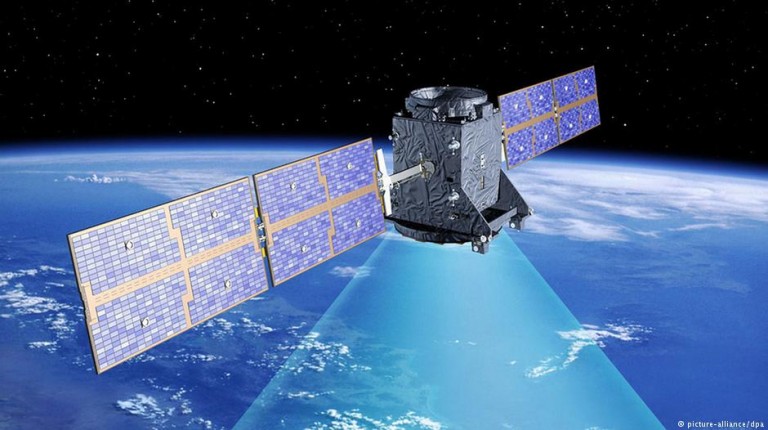 An Ariane 5 rocket will deliver four new Galileo satellites into orbit on Thursday. This will bring the number of operational satellites for the European prestige project to 18, with 12 more to follow.The European Union is one step further on its path towards building a civilian-controlled satellite navigation system. The new Galileo system is designed to deliver much more precise data for private and commercial users than the current US Global Positioning System (GPS) does.

An Ariane 5 ES rocket will take off on Thursday morning at 10:06 am local time in Kourou, French Guyana, and carry four satellites, each weighing 738kg, into orbit. This will be 13:06 GMT and, at the European Space Agency's mission control (ESOC) in Darmstadt, 14:06 CET. Within less than five hours the satellites will be delivered into their respective orbits, and by then it will also be clear whether or not the mission was a success.

The launch will not only mark an important step for the construction of the Galileo system, but also for the rocket itself. Ariane 5 is the workhorse of ESA. Never before has an Ariane 5 rocket delivered so many – and such heavy – satellites at once. As this is the 75th launch of an Ariane 5, this rocket type now surpasses the number of launches of its predecessor, Ariane 4. What is more, all of the Ariane 5's launches have been flawless.

Ariane 5 is one of the prestige projects of the European Union. In contrast to the US GPS system, which is 20 years older, it is civilian-controlled. Therefore, Galileo offers its private and commercial users the whole spectrum of precision navigation that is technically possible.

Using GPS, private users can navigate with a precision of up to 15m. Galileo offers a precision of up to 4m for its fully open service. Commercial users and official government services can even receive a precision of a few centimeters. This is important, for example, for fully or partially automated planes, cars or ships. By 2018 Galileo should be fully operational, with at least 24 satellites in place. That is the threshold the system must reach before it can deliver a complete service.

The high precision offered by Galileo was one of the reasons why the Pentagon rejected the system in the first place. There were fears that adversaries of NATO or of other allies could use it for military purposes. However, engineers have found a solution to that problem: should a serious crisis arise, the military can jam a certain part of the broadcasting spectrum. This would cut off civilian use, but still retain the functions that are reserved for allied military purposes.

Galileo can do much more than simply provide signals for navigation. In combination with the search-and-rescue satellites of the COSPS-SARSAT system, it will be able to better locate ships or mountain climbers in distress. It is also possible for people at the search-and-rescue control centers to respond to people who send distress signals from their SOS beacons.

Not just a European system

Besides the ESA member states, numerous other countries are involved in Galileo in one way or another. Among them are India, Israel, Morocco, Saudi Arabia, South Korea and Ukraine.

Even though China is developing its own satellite navigation system, called Bei Dou, it has also contributed to Galileo by setting up a university training center. This focuses mainly on the development of new applications and gadgets so that businesses and people can make use of the new navigation possibilities.

Russia, which has its own navigation system called Glonass, is also indirectly involved: all of the previous 14 Galileo satellites have been launched by Soyuz rockets.

Of course, when it comes to "competing" navigation systems, it is worth remembering that they complement eachother. Depending on how they are built and what software designs they have, earth-based navigation gadgets and applications can use signals from more than just one of the systems – which increases their overall precision.

The Value of a Pale Blue Dot

A protest against worldly pleasures