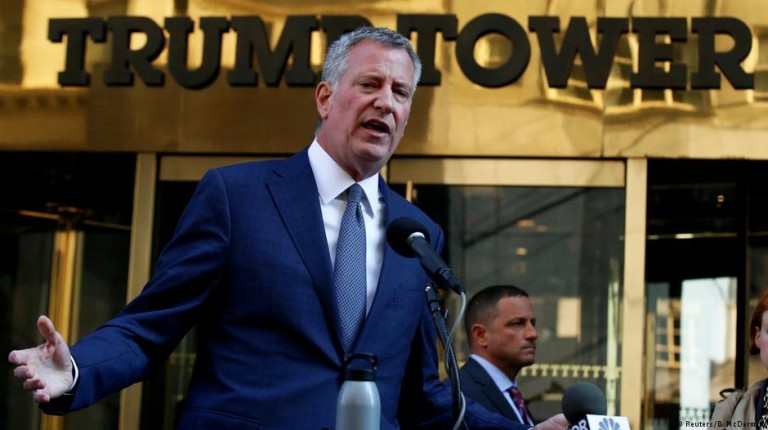 New York Mayor Bill de Blasio has told US President-elect Donald Trump that the city is “fearful” of his incoming administration. De Blasio said he expressed concerns about Trump’s policies towards illegal immigrants.After visiting Manhattan's Trump Tower on Wednesday, where the billionaire president-elect is building his team to lead the country, de Blasio said he would do all he can to prevent the large-scale deportation of immigrants.

Vowing to obstruct Trump's campaign pledge to expel millions of undocumented immigrants, the liberal mayor said the billionaire's stance "flew in the face of all that was great about New York City."

No word on Trump's responses

"I reiterated to him that this city and so many cities around the country will do all we can to protect our residents and to make sure that families are not torn apart."

New York's foreign born population is 37 percent, according to census data, compared to the national average of 13 percent.

De Blasio said their talk was "candid" and "respectful" but he had told Trump immigrant families should not be torn apart by deportations. Later he tweeted that he had warned the property tycoon against an abandoned police tactic supported by Trump of stopping and searching people on the street.

After last week's shock Trump win, the Democrat mayor said the city would delete the names of hundreds of thousands of undocumented immigrants who have received a city ID card, to stop the incoming administration from identifying or deporting them.

As well as New York, the mayors of six other US cities including Los Angeles and Washington DC have vowed to protect immigrants from being deported.

Since the election, Trump has softened his pledge to banish 11 million illegal migrants, to just those with criminal records, or who are gang members or drug dealers.

As well as migration, De Blasio said they had also discussed the need for tougher Wall Street regulation and increased protection of the rights of minorities including Muslims.

During the US presidential election campaign de Blasio described the Republican candidate as "dangerous" and unqualified to lead the country. Trump, in turn, has called de Blasio "the worst mayor" in the country.

Immigrant lives at mercy of German bureaucracy, knows very well he has no asylum rights