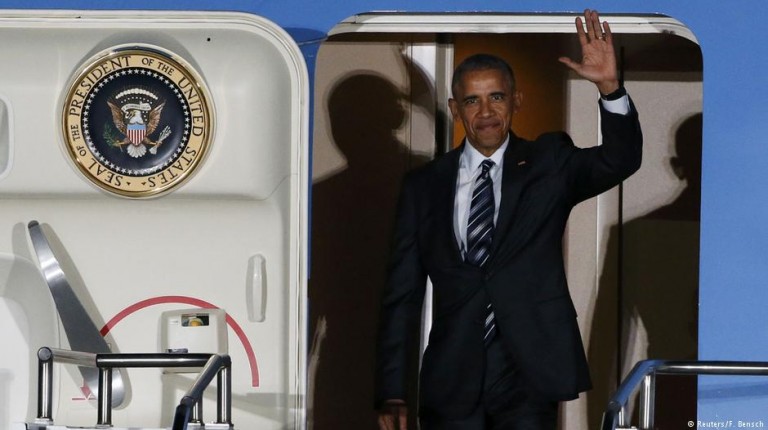 Chancellor Angela Merkel is hosting Barack Obama in Berlin for the last time in his presidency. They will have plenty to discuss as frequent Merkel critic Donald Trump prepares to govern the US.Chancellor Angela Merkel is likely to have plenty of questions for US President Barack Obama on his last trip to Germany – the biggest will be what he makes of Donald Trump, and what his successor's presidency is likely to mean for Germany's relationship with the US.

But unlike his celebrated visits to the nation's capital in the past, Obama will not be addressing crowds or even giving a speech. The president had dinner with Merkel on Wednesday evening and spent the night in the Adlon hotel just meters from the Brandenburg Gate (under the watch of some 5,000 security personnel, who reported no incidents).

The president is due to give an interview with German public broadcaster ARD – which will be aired in the evening – before being officially received at the chancellery in the afternoon. The two leaders are then expected to give a joint press conference in the early evening, following a discussion that is likely to cover the entire gamut of world crises, from Syria to Ukraine to the rise of the populist right, and the radically different working relationship that Merkel is likely to have with Trump next year. The Republican repeatedly criticized Merkel's attempts to abide by the principles of German asylum law during his election campaign.

In a joint op-ed for the "Wirtschaftswoche" magazine published on Thursday, Obama and Merkel stressed the two nations' "shared commitment to personal freedom and dignity, which only a vibrant democracy under the rule of law can guarantee."

"Our countries share a joint responsibility to protect and preserve our way of life," the two leaders wrote, before listing the institutions threatened by the advent of a Trump presidency: everything from NATO to the Paris climate agreement. It also took pains to underline the importance of US-German economic ties.

"Since 2015, the United States has become Germany's most important trading partner with a trade volume of 173 billion euros [$185 billion], and conversely, Germany has become a cornerstone of US economic relations with the European Union," the two leaders wrote. "Behind these impressive figures are millions of companies and employees who produce these traded goods and services and whose jobs depend on them."

On Friday morning, Obama will return to the chancellor's office for a round of talks with his counterparts across Europe: French President Francois Hollande, Italian Prime Minister Matteo Renzi, Spanish Prime Minister Mariano Rajoy, as well as British Prime Minister Theresa May. This time the future of the troubled TTIP trade deal between the US and Europe is expected to be central to the discussion. Whether it has one under Trump is another question.

Opinion: Trump, the anti-Obama for Africa

Embargo on Cuba is an embarrassment for the United States