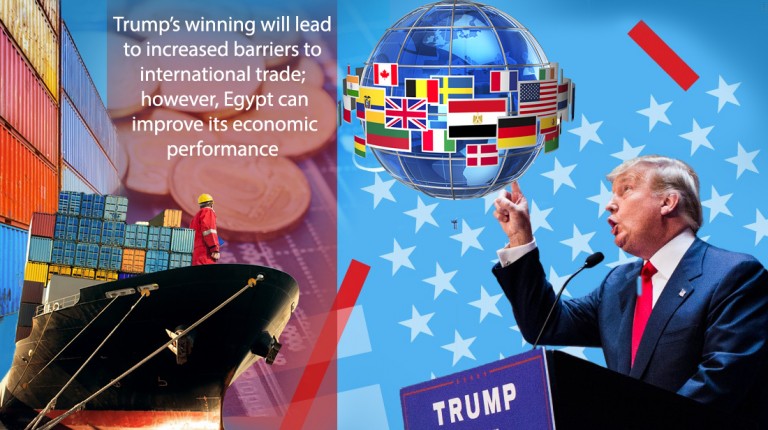 Despite an apparent setback in global stock markets caused by Donald Trump winning the US presidential election, coupled with the high degree of concern among international investors, it seems that Egypt is poised to take on a different position in a Trump-ruled world.

Since Tuesday evening, the global stocks tumbled, from the United States to Japan; however, by contrast, the main index of the Egyptian stock market EGX 30 rose by 1.28%.

On Wednesday, EFG Hermes, an investment bank in Egypt and the Middle East and North Africa (MENA) region offering banking services to retail and institutional clients, said that Trump’s winning the US presidential race will work in favour of the markets that have a “weak link” with the US market, such as Egypt.

Daily News Egypt takes a look at Egypt’s economic potential in cooperating with the US under a new administration led by Trump.

With Trump as president of the US, the recovery of world oil prices will be negatively affected in terms of increasing supply because of the fewer restrictions on oil production given Trump’s pledge to open all federal land and waters for fossil fuel exploration in light of a weaker demand for crude.

However, Egypt will benefit from that, as it is a net importer of oil due to the drop in world oil prices.

International fears of Trump as president

In the hours following Trump’s electoral victory, stock markets around the world experienced a sharp decline and investors began turning to safe havens such as gold.

Moreover, the dollar decreased against major competitive currencies. It decreased by 2.6% against the Japanese yen, and declined by 1.6% against the Swiss franc. The euro rose to its highest level in two months, reaching a price of $1.12, up 1.8%.

On the other hand, the Mexican peso declined by more than 13%, its lowest level on record at below 21 pesos to the dollar. Spectators relate this to Trump’s previous hostile statements towards Mexico.

European stocks declined on Wednesday after Trump was announced the winner. Japanese stocks declined more than 5%, marking the biggest daily decrease since Brexit in June. American capital markets indexes and the London Stock Exchange dropped by more than 5% on Tuesday evening.

In addition, Gulf stocks , headed by Abu Dhabi and Dubai, declined by about 0.6% and 0.84%, respectively, as the main index of the Kuwait Stock Exchange declined by 0.26%, while the main Saudi index TASI rose by 0.65%, and the Bahrain Stock Exchange index increased by 0.11%.

Concerns about the US economy’s isolation

President of the Federation of German Industries Ulrich Grillo warned against the possibility that the new US president would isolate the US economy.

“The US has to continue to preserve open markets; anything else would be poison for the US economy,” said Grillo. “Germany will continue to advocate for the conclusion of a fair free trade agreement between Europe and the US.”

Trump criticised the planned free trade agreement between the EU and US known as the “Transatlantic Trade and Investment Partnership (TTIP)” during his campaign, describing it as “the greatest danger” for US companies.

TTIP is a trade agreement to be negotiated between the EU and US to help people and both large and small businesses by opening up the US to EU firms, helping cut red tape that firms face when exporting and setting new rules to make it easier and fairer to export, import, and invest overseas.

Prosperous opportunities for Egypt’s economy in a Trump world

EFG Hermes noted that Trump’s win will lead to increased barriers to international trade, reducing growth opportunities in emerging economies strongly linked to the US market , such as the United Arab Emirates (UAE); however, “weak link” markets such as Egypt and Kuwait can improve their economic performance.

EFG Hermes also pointed out that domestic factors will have a large role in identifying growth potentials and attracting investments to MENA countries. Therefore, the devaluation of the Egyptian pound’s value and Egypt’s access to the International Monetary Fund’s (IMF) loan represent cases that demonstrate the importance of local factors in attracting investment. With these moves, expectations for improving the outlook on growth increases, besides attracting foreign investment in bonds denominated in pound.

Professor of economics at Cairo University Aliaa El-Mahdi said that the new president would not significantly affect Egypt’s economy, while the negative impact is expected to be clear in China’s and Europe’s economies. Further, the Egyptian economy is not significantly tied to US trade or foreign investment.

In general, developing countries are not a priority in the new president’s agenda, and the US congress will not pass all his desires regarding restraints on trade.

Amotz Asa-El, the Jerusalem Post’s senior commentator, said in an article entitled “Trump’s Middle East reset should start in Egypt” that the pound’s flotation and the IMF’s approval of the $12bn loan are symptomatic treatments for an economy that begs for surgery. “This is where Trump’s America can come in,” he wrote.

Asa-El added: “the US could offset Russia’s military adventurism by reinventing Egypt’s economy. The US can lead privately funded agricultural development along the Nile, industrial development outside Egypt’s cities, and an educational revolution within them.”

“The US can help Egypt multiply its agricultural output, the way India’s Green Revolution did in the 1960s; it can help dot Egypt with hundreds of new labour-intensive factories that will give Egypt the jobs it lacks, and help shrink its bloated public sector.The US can help build the new hospitals, universities, and vocational schools that Egypt so patently lacks, and its new Russian friends will never deliver,” said Asa-El. “Such an economically rehabilitated Egypt will help restore the Middle East’s stability, and such a diplomatically refocused US will restore its prestige, and return to lead the world.”

Can chemistry between Al-Sisi, Trump lead to economic convergence?

In September, while President Abdel Fattah Al-Sisi was attending the 71st session of the UN general assembly in New York, he met with the future president-elect Trump, who called Al-Sisi “a fantastic guy”. Trump said he sensed a “chemistry” between him and Al-Sisi.

After the meeting, Al-Sisi said he has no doubt that the Republican candidate would be a strong leader.

Trump further praised Al-Sisi after their meeting in New York and pledged to invite him to visit the White House if he is elected president of the US, and said he would also like to visit Egypt.

Trump’s campaign said the Republican candidate expressed his strong support for Egypt’s war on terrorism, noting that the US would be, under the administration of Trump, a sincere friend to Egypt, not just an ally.

After Trump was announced the winner of the US elections, Al-Sisi was the first to congratulate the president-elect. Al-Sisi said he looked forward to enhanced cooperation between the two countries at all levels. Additionally, Al-Sisi invited the new American president to visit Egypt.

US ambassador to Egypt Stephen Beecroft said the US will work with Egypt to confront ongoing problems, particularly regarding the economy, in the coming period, pointing out that the US has provided Egypt aid and investments worth $70bn since 1979.

Secretary general of the Confederation of Egyptian European Business Associations (CEEBA) Alaa Ezz said that Trump, as a businessman, will take care of economic issues and the development of trade relations with countries around the world, which would include the growth of bilateral relations between Cairo and Washington. He attributed that to the meeting between Trump and Al-Sisi and their positive remarks and statements after the meeting.

El-Fekki expected that there would be an influx in American investments in Egypt, especially after the exit of American Apache Corporation, an oil and gas exploration and production company, from the Egyptian market in March.

Further, El-Fekki predicts that Trump’s victory will have positive effect on agreements between Egypt and US, especially in the Qualified Industrial Zones (QIZ) agreement.

QIZ is an agreement to make use of free trade zones between Egypt, Jordan, the US, and Israel, El-Fekki explained.

Accordingly, El-Fekki pointed out that the amendment and promotion of the agreement will encourage other companies from other countries to invest in the Egyptian market, such as China, in order to make use of the agreement’s privileges.

No change in economic relationship, but possible at the political level

Not everyone believes a Trump presidency will bring about economic benefits for Egypt. Gamal Moharam, former president of the American Chamber of Commerce (Amcham), said that US-Egyptian economic relations will not change as a result of Trump winning the presidential elections, but it is likely that relations are changing at the political level for the best for Egypt.

Moharam noted that institutions run America, not the people, and institutions include the presidency, the US state department, the Pentagon, and the US congress.

Moharam pointed out that during the Obama administration, the defence and state departments were pro-Egypt.

He explained that Trump’s personality is different from Obama and his different political orientations will benefit Egypt in terms of developing political relations.

Egypt is our window to Africa: Russian Ambassador