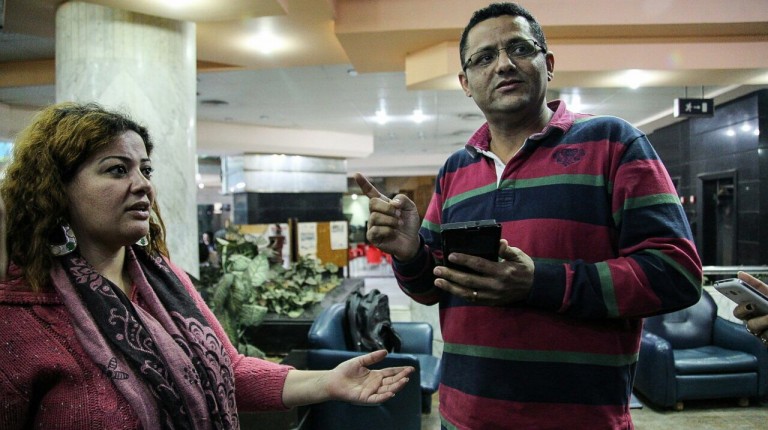 The Qasr El-Nil Misdemeanours Court sentenced Saturday the leaders of the Press Syndicate to two years in prison and EGP 10,000 bail each on charges of sheltering wanted suspects in the syndicate. The verdict was issued in absentia.

Press Syndicate president Yehia Qalash, secretary general Gamal Abdul Reheem, and head of the Freedoms Committee Khaled El-Balshy—the defendants in the case—will hold an urgent meeting at the syndicate to discuss their next steps.

Journalists were banned from covering the session held at Abdeen court in downtown Cairo.

The defendants were accused of allowing journalists Amr Badr and Mahmoud El-Saqqa to hide in the syndicate amid a security pursuit of the two journalists.

On 1 May, police forces stormed the syndicate in an unprecedented incident and arrested the two journalists, on grounds that the prosecution issued arrest warrants for them.

Despite the charges brought against the Press Syndicate leaders, El-Saqqa and Badr are currently released. “Today’s verdict seems very politicised, being far from law enforcement,” Badr commented Saturday, as journalists started gathering at the syndicate.

“This comes amid a three-year continuous crackdown campaign against the syndicate and journalists,” Badr added.

El-Balshy, who was also present at the syndicate, hoped that the verdict would not distract journalists from other major causes, such as their social and economic rights in the upcoming critical period, the battle for a unified media law, and the status of detained journalists.

“Our attention to our causes should not be diverted after the verdict, for which there will be other judicial battles,” El-Balshy told journalists after Saturday’s verdict.

The verdict can still be appealed.

In Video: Press freedom is in danger: Amr Badr