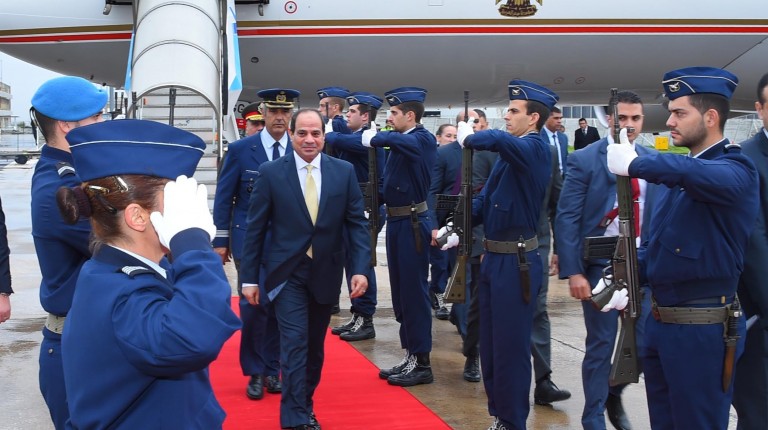 President Abdel Fattah Al-Sisi said on Monday that Egypt appreciates Portugal’s balanced stance towards the democratic transition process in Egypt and its understanding of the Egyptian people’s desire for progress and freedom. In a joint press conference held in Lisbon with his Portuguese counterpart, Marcelo De Sousa, Al-Sisi said he trusts Portugal’s support in building a democratic and progressive Egypt.

The president went on to say that during his meeting with De Sousa, it was obvious that Portugal is aware of the rather important role Egypt is playing in the region, and the importance of its peace and security and its direct impact on the stability of the Mediterranean region and Europe.

Al-Sisi said there was significant progress in bilateral relations and cooperation between the two countries over the past few years. He added that there will be a joint committee for economic and technical cooperation that will hold its first meeting in Cairo in the near future.

Al-Sisi urged Portuguese investors to take advantage of the opportunities in infrastructure and development projects in Egypt.

The president said that the two countries are geographically close, and should work together to tackle several issues, including terrorism, extremism, and illegal immigration.

Al-Sisi concluded the press conference by saying he is looking forward to increased cooperation between the two countries, and congratulated the United Nations secretary general designate António Guterres on his new appointment. Al-Sisi said it reaffirms the important role Portugal has on the international level and its ability to maintain international peace and security.

Al-Sisi’s visit to Portugal began on Sunday, and is expected to conclude on Tuesday. He is scheduled to meet the Portuguese prime minister as well to discuss regional issues of common interest.

The Portuguese LUSA news agency held an interview with Al-Sisi on Saturday prior to his visit to Portugal, in which the president touched upon several issues including human rights, combating terrorism, and economy in Egypt.

During the interview, Al-Sisi said that there was a 37% increase in the rate of trade between Egypt and Portugal last year. He also discussed US president-elect Donald Trump, saying no one should jump to conclusions and that the American role in the Middle East will not diminish under Trump’s administration.

Al-Sisi’s trip marks the first visit of an Egyptian official to Portugal in 24 years. According to a statement released by the Egyptian Ministry of Foreign Affairs on Saturday, Egypt was the first country to be invited to meet De Sousa since he took office in March.