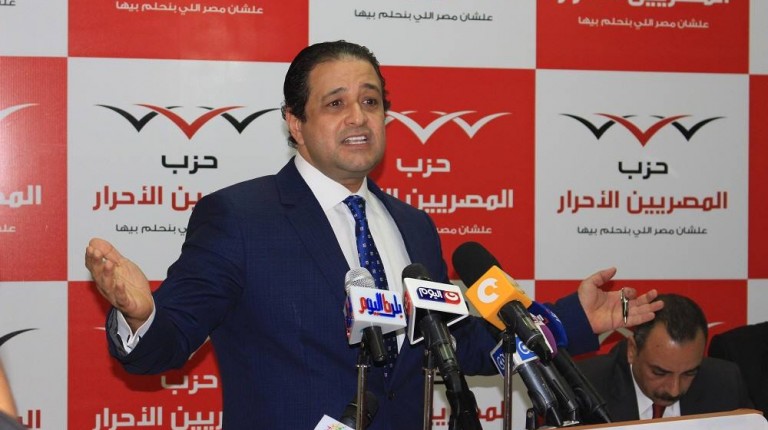 Alaa Abed, the head of the Free Egyptians Party and its parliamentary bloc, said that Prime Minister Sherif Ismail’s government is in a critical condition, and if it doesn’t improve its performance, it should quit.

On the sidelines of a conference held by the party to discuss the flotation of the Egyptian pound and the increase in fuel prices, Abed, who also leads the parliamentary Human Rights Committee, said that these decisions were inevitable.

In an interview with Daily News Egypt, Abed discussed the ramification of these choices on the political and economic realities the country is currently facing.

How does the Free Egyptians Party view recent government decisions? How do you evaluate the government’s performance?

The recent decisions made by the government were necessary to overcome the current economic crisis. We could not keep providing subsidies on basic commodities, especially given that this system has failed in many socialist countries.

Egypt is in a state of war to overcome its economic conditions and keeping these failed policies in place will eventually lead to the overthrow of the Egyptian government.

What is your party’s opinion about the significant increase in the prices of goods and services since the government’s decision?

The Free Egyptians Party supports and praises the government’s recent decisions; however, the market currently requires strong monitoring from the various ministries in order for prices to be controlled.

In addition, the government should launch social protection programmes for the poor, so as to ensure that subsidies are applied to those who deserve them. This is a big challenge for the government.

There are other programmes that still require the government’s application, including the minimum wage and facilitating support issued by the Social Solidarity Fund.

Everyone knows that subsidies do not reach those who deserve them, and this was a critical time to make such a decision regardless of its negative effects on citizens. Whatever the case, the economy will soon recover.

What is your view of the price of the US dollar at banks following the flotation?

We should all be aware that the existence of two different exchange rates, at banks and in the unofficial market, was not acceptable or sustainable.

Investors, whether local or foreign, would never inject money into a market where the difference between the official and unofficial exchange rate reaches more than 100%.

The current price of the dollar is the same in both markets, which can increase or decrease at anytime. I predict that the pound will fall against the dollar in the coming period following bold decisions made by the Supreme Council for Investment, headed by President Abdel Fattah Al-Sisi.

The Free Egyptians Party supports such decisions, especially as they, for the first time, include supporting projects in Upper Egypt, as well as other areas throughout Egypt.

As for the price of fuel, it should be noticed that there was no real increase, given that the cost of every litre is $1.5.

Some are calling for the government to rationalise spending and reduce the number of its ministries. What does your party think about these ideas?

The Free Egyptians Party has previously called on the government to rationalise spending. Every minister has to follow that policy; we cannot continue spending as if we were a rich country while we are going through these difficult circumstances.

As for reducing the number of ministries, there are already offices in place for these ministries. However, I call on the ministers to make sacrifices similar to Al-Sisi, by waiving half of their salaries and using their own cars.

Egyptians must decide to join hands and support the Egyptian government to face the current set of difficult circumstances, and the media has a significant responsibility in this regard.

I’m not criticising the media, but it must explain the importance of the government’s recent decisions to the people and address the positive and negative aspects. The media should note that continuing in previous policies would ultimately lead to the state’s failure. It is not reasonable to continue in a policy that only seeks to temporarily relieve pain.

Last Friday, the prime minister announced the government’s intention to draft a bill on taxing individual income. Does the Free Egyptians Party support this?

I do not support issuing a law to impose taxation on individuals’ income, as it would lead to the flight of investors, whether local or foreign. The state must now attract capital, and in a later stage it can impose fees that achieve significant revenues.

Al-Sisi launched an initiative for lending EGP 200bn to support small- and medium-sized enterprises (SMEs), but complaints have been made that claim the initiative has not been implemented. What is your position on this?

We also called for this initiative to be activated more than once. I would like to note that SMEs are the hope with which this country can move forward.

The country must be divided into six investment regions. Each region should have its industrial and economic characteristics that fit certain industries.