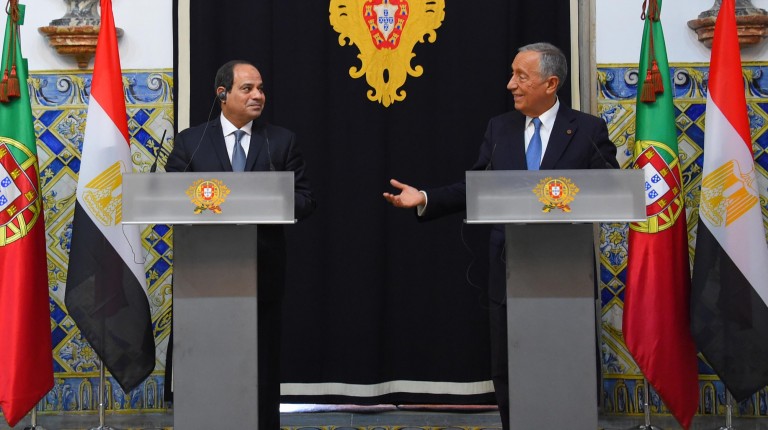 Egypt’s President Abdel Fattah Al-Sisi concluded his three-day visit to Portugal on Tuesday by visiting the Portuguese Military Academy, where he gave a lecture on counter-terrorism measures, security, and the sovereignty of the law, according to a presidential statement.

The lecture was attended by leaders of the Portuguese military and several diplomats. Al-Sisi said during the lecture that understanding the surrounding environment of terrorism is essential to combating it. He was critical of international efforts to combat terrorism, adding that they had failed to protect societies from the growing danger of terrorism and had allowed it to permeate the globe undeterred by borders.

Al-Sisi said international efforts lacked the vision needed to tackle this issue because it has had insufficient understanding of the origin and nature of terrorism. He added that security measures alone have not been enough to combat extremism, and that religious institutions are playing their part to combat such ideologies.

Despite such claims, local and international rights organisations have denounced the continuing deterioration of human rights in Egypt. According to these organisations, several violations and mass trials have occurred under the umbrella of combating terrorism.

Early on Tuesday, Al-Sisi met with Portuguese businessmen to tackle cooperation in fields of technology, agriculture, renewable energy, engineering, and various other sectors. They spoke on the importance of increasing cooperation in trade between the two countries. Al-Sisi also discussed mega projects that are currently being executed in Egypt and the new Investment Law aimed at facilitating investment.

Al-Sisi met on Monday with Portuguese prime minister António Costa. He expressed his appreciation to the warm welcome he received in Lisbon that reflects the strong and historic ties between the two countries.

Al-Sisi said during his meeting with Costa that Egypt is keen on enhancing its relation with countries within the European Union, primarily Portugal. Costa said that Al-Sisi’s visit is an important step to promote bilateral relations between the two countries. The two also spoke about the latest developments in the Middle East, and discussed cooperation to combat terrorism and extremism.

On Monday, Al-Sisi held a joint press conference with his Portuguese counterpart, Marcelo De Sousa, in which he praised Portugal’s stance towards the democratic transition in Egypt and its understanding of the Egyptian people’s desire in building a democratic and progressive country.

Al-Sisi’s visit to Portugal marks the first visit of an Egyptian official to Portugal in 24 years. According to a statement issued by the Ministry of Foreign Affairs, Egypt was the first country to be invited to meet De Sousa since he took office in March.