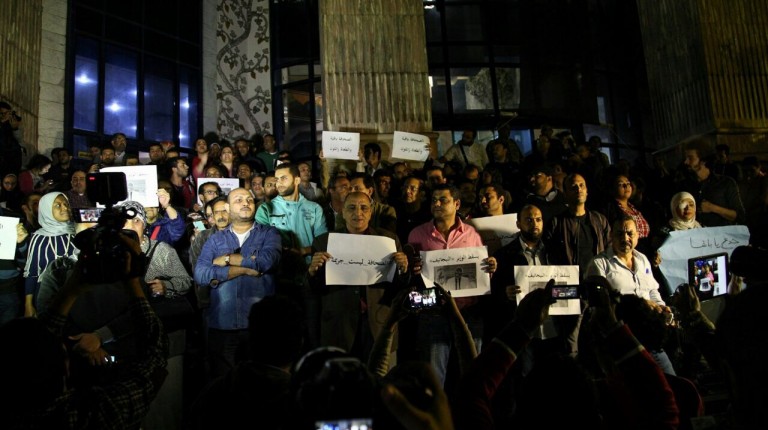 The Press Syndicate called for journalists to attend an open meeting on Wednesday afternoon to discuss the repercussions of the court verdict sentencing syndicate president Yehia Qalash and board members Gamal Abdul Reheem and Khaled El-Balshy to two years in prison on charges of harbouring suspects.

The verdict was issued on 19 November and the bail was paid on 22 November. The court scheduled the first hearing for the appeal against the verdict on 25 December.

The syndicate stated that the verdict is only part of the discussions, among pending issues such as press related laws and the impact of the economic situation on journalists.

On Monday, 17 NGOs condemned the verdict by asserting that it is “a slap in the face for freedom of opinion, expression and the media in Egypt, and a message of terror to anyone with independent views”.

The NGOs argued that there were legal violations committed during the interrogations with the three defendants. This unjust situation was compounded by a biased investigative authority, since the prosecution had issued a statement on 3 May taking the side of the Ministry of Interior and rushed in dispensing accusations against the defendants without investigations.

“The [verdict] is a shock that has the same brunt of the crime that the police raised on the Press Syndicate,” the statement read.

This statement was published by the Egyptian Initiative for Personal Rights (EIPR) and signed by El Nadeem Centre, the Association for Freedom and Thought (AFTE), the Egyptian Centre for Social and Economic Rights (ECESR), the Egyptian Commission for Rights and Freedoms, among others.