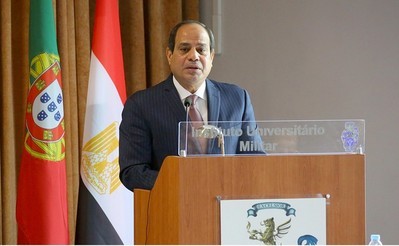 Egypt is unlikely to send military forces to Syria, President Abdel Fattah Al-Sisi said on Tuesday, stressing that it would be better if Syria’s national army took sole responsibility for securing the country.

In an interview with a Portuguese channel during Al-Sisi’s visit to Portugal, the president said that Egypt is supporting the Syrian army in its war on terrorism. The Syrian Arab army is affiliated to Syrian president Bashar Al-Assad, which is one of the many political factions involved in Syria’s civil war.

Al-Sisi added that a political solution is the only exit to the current turmoil in Syria. He said that in the United Nations security council Egypt voted in favour of the Russian draft resolution for peace in Syria owing to the common suggestions it had with the French draft resolutions, which are an immediate ceasefire and access of humanitarian aid to all of Syria.

Regarding the new United States president-elect Donald Trump, Al-Sisi said that his statements during his presidential campaign may differ from his policies when he takes office in January. He added that he understands the measure of registering Muslims in the US, saying that each country tries to achieve peace and stability for its people.

Al-Sisi went on to say that Egypt is serious regarding its war on terrorism, and that it has made significant progress in terms of combating extremism and terrorism. He also emphasised the importance of monitoring what is being said inside mosques to prevent any extremist ideas from spreading.

Al-Sisi’s visit to Portugal was the first visit of an Egyptian official to Portugal in 24 years. According to a statement issued by the Ministry of Foreign Affairs, Egypt was the first country to be invited to meet Portugal’s president Marcelo Rebelo De Sousa since he took office in March.