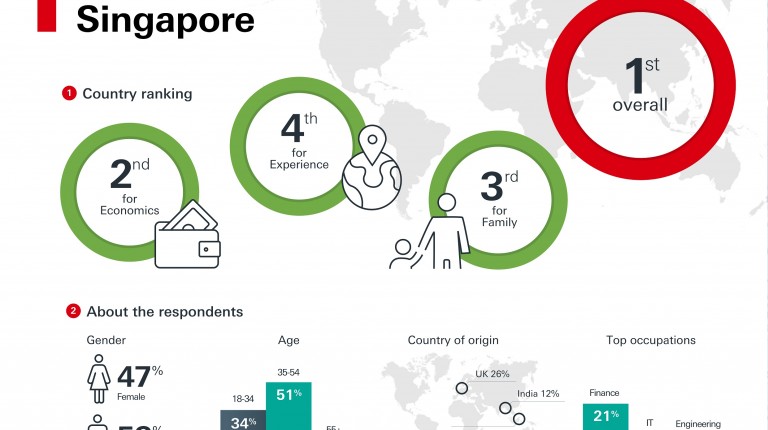 In regards to economic confidence, Singapore performs best in comparison to other countries. Nearly three-quarters (73%) of expats in Singapore feel confident about the local economy. While more than three in five (62%) expats living in Singapore say they are earning more than they would in their home country, compared to 42% of expats globally.

Moreover, Singapore stands out as a good place to raise a family; 75% of expats surveyed rated the quality of education as better than in their home country. The top three reasons why expats chose Singapore as their destination are for a new challenge (38%), to improve their earnings (37%), or to improve their quality of life (36%).

According to the report findings, younger expats are the most likely of all age groups to move abroad in search of greater fulfilment and purpose at work. Nearly 22% of expats aged 18-34 say they moved abroad to find purpose in their career. They also are more likely to achieve greater job satisfaction; almost half said that they find their work more fulfilling than it was at home.

On the other hand, older expats are less likely to cite the same reason; only 7% of expats aged 55 and over and 14% of expats aged 35-54 say their move abroad was motivated by a search for purpose at work.

The three destinations with the highest percentage of expats who moved there to find a purpose for their careers, are Japan (22%), Taiwan (22%), and the United Arab Emirates (20%). Financial services attract 15% of younger expats, while more than 11% of them work in education, marketing, media, or creative services.

Switzerland ranks first in the report’s Economic league table, while Egypt ranks at 40. This league table ranks each country or territory using a score summarising expats’ views on nine key questions. Three of these questions concern an expat’s personal finances, a further three cover views on the local economy, and the final three cover an expat’s working life.

One of the main drivers for expats is reaching their financial goals, such as buying a property; 41% say that the expat life has accelerated their progress towards that goal compared with 19% who find the reverse. Saving for their children’s education is also a driver; almost 29% said that working abroad helped them towards achieving, or saving money for retirement with 40% of expats saying that their life abroad helped them speedup their progress towards this goal.

Furthermore, higher income levels are the primary factor for some expats in the world’s financial hubs. In Switzerland, expats earn $188,000 a year on average, in Hong Kong the average salary is $170,000 a year, and in Singapore, the average salary is $139,000 a year. More than half of expats in Hong Kong, Switzerland, and Singapore have been able to build long-term savings and investments more swiftly than the global average of 38%.

Emerging economies, on the other hand, offer more opportunities for business growth, say 44% of expats, compared with 35% of expats living in developed economies. Significantly higher proportions of entrepreneurs can be found in Peru (25%), Brazil (24%), and Chile (23%). In fact, expats moving to emerging economies are some of the most likely to say they were motivated by the ambition to start a new business: 13% do so in Kenya and 11% in Brazil, India, Indonesia, and Peru. This compares to 5% of expats globally.

Moving to the Experience league table which ranks each country using a score based on the expats’ views on nine key questions about the experience they have in their destination. Three of these questions cover an expat’s lifestyle, another three look at the people around them, and the final three concern the ease of setting up.

Egypt ranks at 45th place in the Experience league table, while New Zealand ranks first and Spain second. These latter two countries scored highly on the criteria such as quality of life and ease of moving to a new country. More than half of expats (56%) found it easy to arrange accommodation, compared to a global average of 46%.

Globally, most expats find living abroad to be a positive experience, with 52% agreeing that their quality of life has improved since moving, compared with 22% who disagree. Over three in five (61%) agree they are integrating well with the local people and culture, compared to 14% who disagree. Forming new friendships is also easy for more than half (52%) of expats, with only around one in five (21%) finding this difficult.

The third and last table included in the report is the Family league table which is concerned with the expats views on questions regarding the family aspects of living in their adopted country. These questions cover an expat’s relationships, as well as education and childcare, and the final three examine the impact of raising children abroad. Egypt ranks 40th in the family table while Sweden ranks first as the best destination.

Moreover in Bahrain, ranking at 9th place, which makes it the highest ranking Middle Eastern country in the 2016 Family league table, 42% of parents say the ease with which their children make friends is better than in their home country, compared with 32% across the Middle East and 31% globally.