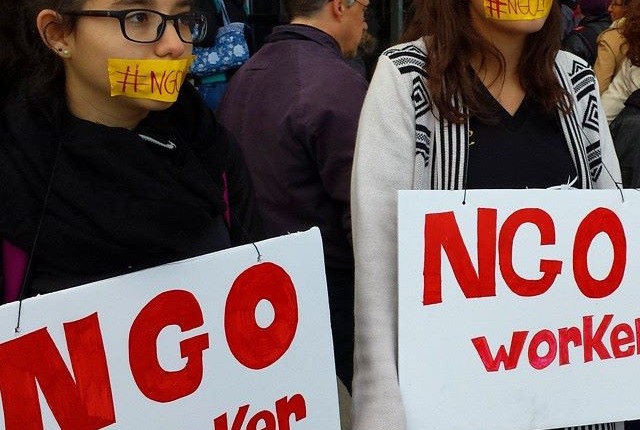 “Restrictions imposed on defenders’ freedom of movement have regrettably become routine in what is seen as a broader crackdown against Egyptian civil society that has continued unabated since 2011,” said Forst, who received more than 15 travel ban cases in 2016 for human rights defenders who were prevented from travelling abroad for regional and international events.

Rights defenders, political activists, academics, and media figures have increasingly been banned from leaving the country as they attempted to travel.

TV presenter Amr El-Leithy was banned from leaving Cairo International airport on Thursday, according to state-media. El-Leithy was reportedly going on a family trip to Dubai but was informed that a travel ban was issued for him by the general prosecutor.

However, El-Leithy reportedly told local press that, after inquiring, prosecution officials denied that the prosecutor issued a travel ban for him. The TV host was criticised by government supporters in October after broadcasting a video of a tuk tuk driver angrily criticising the country, during an episode of his show Wahed Men Al Nas (One of the People) on Al-Hayat TV channel.

Another report on travel bans was jointly issued by the Association for Freedom of Thought and Expression (AFTE) and the Cairo Institute for Human Rights (CIHRS) on Wednesday. The report accounts for 80 cases of travel bans between June 2014 and September 2016.

“Travel bans are an unconstitutional form of political retaliation and psychological harassment deployed against activists […]. The travel ban has become one of the most significant tools of repression in Egypt, aimed at indirectly deterring and intimidating Egyptians, as well as some non-Egyptians, inside and outside of the country,” read the statement.

According to the UN’s statement, restrictions are often based on investigations related to the controversial “NGOs foreign funding” case launched by the Egyptian government in 2011.

“It is seriously concerning to observe that travel bans, along with other restrictions on fundamental freedoms to free speech, association, and assembly, seem to have become politically motivated means to stifle civil society’s movement in the country, and to choke legitimate and democratic debate, both within and outside Egypt,” said the UN expert, warning that stopping people from participating in rights activities abroad violates international conventions on human rights.

Both reports noted an ambiguous legal process behind travel bans. The UN highlighted the non-notification of bans to citizens before they attempted to travel. It further stressed that banned travellers are usually denied information regarding the legal basis for the decision.

The claim was supported by the AFTE and CIHRS report, which noted: “The right of the targeted individual to be informed about the grounds and duration of the ban is violated,” whether bans came from security bodies or judicial authorities.

“Many were also illegally questioned at Homeland Security offices as part of their ongoing attempts to retrieve their confiscated passports and/or to determine the reasons for the ban and its duration,” said the report, adding that they have also been meticulously been searched.

The UN special rapporteur called on Egyptian authorities to refrain from imposing restrictions against human rights defenders, and instead consider dedicating its legal, administrative, and financial resources to empowering civil society.

Currently, this seems unlikely to happen as the parliament is preparing to issue a new NGOs law that was not subject to social discussion and faces severe criticism for increasing restrictions on civil society.

AFTE and CIHRS issued several recommendations for the government, including respecting constitutional principles on freedom of movement and putting an end to targeting rights advocates with arbitrary travel bans.