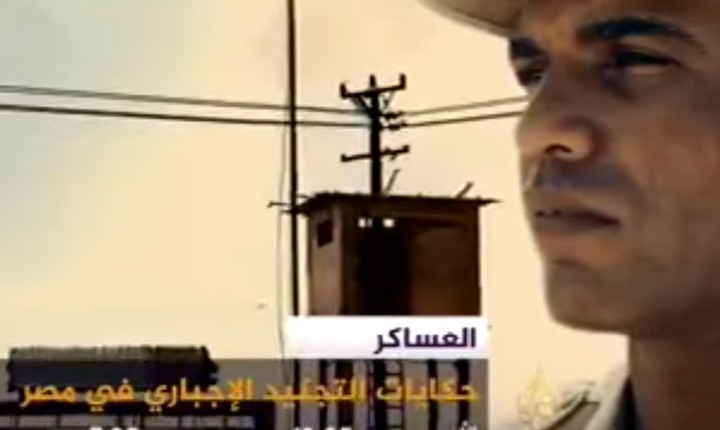 The Qatar-based news channel Al-Jazeera broadcasted recently a promotional trailer of a documentary it produced entitled “Conscripts” that tells the story of several Egyptian conscripts that claim they have been mistreated while serving out their compulsory army service.

Following the release of the promotional trailer, outrage erupted among social media users and prominent media figures in Egypt.

In the trailer, several people give their testimonies of their time as conscripts in the army, claiming ill-treatment and abuse by army officers.

The trailer also showed a man in army clothes being assaulted by other officers and being forced to do household work. In the background, a voiceover echoes multiple complaints about mistreatment in the army.

According to Egyptian law and the Constitution, young Egyptian men are obligated to enrol in the military. University graduates typically serve for one year in the military, while lower educated men may spend two to three years in service.

In response to the trailer, several media outlets lashed out at Al-Jazeera and mocked the Qatari army’s size and experience.

Meanwhile, the privately-run channel Al Nahar responded to the trailer by promoting on social media the hashtags “Egyptian military is an honour” and “Egypt’s army produces real men”. The channel also accused Al-Jazeera of inciting Egyptian youth to rebel and object to mandatory military service in order to damage Egypt’s national security.

The privately-run newspaper Al-Youm Al-Sabaa on Thursday lashed out at Qatar and Al-Jazeera, calling the newspaper evil and saying Qatar does not know the real meaning of an army as it depends on mercenaries.

The news outlet Veto meanwhile compared the size of Qatar’s armed forces to that of Egypt. It also accused Qatar of empowering the Muslim Brotherhood.

Topics: Al-Jazeera army conscription Egypt My Army’s Much Bigger Than Yours Qatar

Journalist in Al-Jazeera case gets back Egyptian citizenship