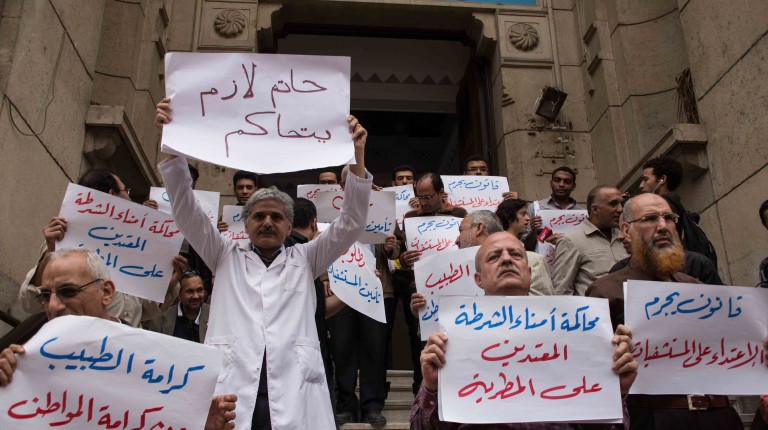 The Matariya Misdemeanours Court adjourned the trial of two non-commissioned police officers sentenced to three years for assaulting doctors to 12 December, during the first appeals session against the verdict held on Monday, state-media reported.

Of nine defendants who received the same sentence issued in September, these defendants are the only two who appealed their prison verdict.

According to the lawyer representing the assaulted doctors, the defendants have all been released. She added that only four of them were suspended from work.

In January, doctors at the Matariya Teaching Hospital, Moamen Abdel Azim and Ahmed El-Sayed, reported to the Doctors Syndicate that they endured a night of physical and verbal abuse, detention, intimidation and threats by nine non-commissioned police officers from the Matariya police station.

When they reached the prosecution, the doctors claimed that they were questioned as suspects and were accused of assaulting three police conscripts while they were on a mission causing them permanent disabilities, which is a felony. The doctors had accused the police officers of forging medical reports.

Eventually, the prosecution upheld accusations against the police officers and said they had illegally used force against doctors on duty.

The incident sparked angry protests. On 12 February, a historical gathering at the Doctors Syndicate was followed by an emergency general assembly and demands for the trial of the conscripts.

Since then, the doctors moved from the hospital fearing more pressure on them.