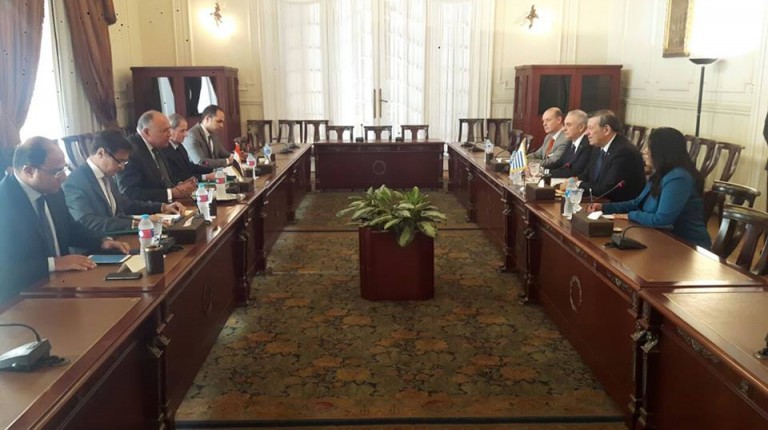 Minister of Foreign Affairs Sameh Shoukry met his Uruguayan counterpart Rodolfo Nin Novoa on Monday. This is the first time a foreign minister from Uruguay has visited Egypt in 13 years.

In a statement released by the ministry, spokesperson Ahmed Abou Zaid cited Shoukry as saying that Egypt’s efforts focus on pushing Palestine and Israel to become involved in serious talks that will lead to a final and just solution to the Palestinian case.

Novoa arrived in Egypt on Monday for a two-day visit as part of a Middle East tour that includes Ramallah and Israel. Shoukry praised Uruguay’s role in encouraging peace talks.

The foreign ministers also discussed regional issues and the situation in Iraq, Libya, Yemen, and Syria. Regarding domestic affairs, Shoukry disclosed Egypt’s economic vision, touching upon the International Monetary Fund (IMF) loan and how it proves the international trust in Egypt’s economy. They also discussed means of enhancing economic cooperation between the two countries.

Shoukry also met with French envoy for the Peace Initiative Pierre Vimont on Sunday to discuss means of triggering peace talks between Palestine and Israel amid changes on the regional and international levels. The minister said he supports the French initiative to revive peace talks.

Al-Sisi said relations with EU countries and institutions must be enhanced, adding that consultation and coordination between Egypt and the EU should be increased given that they share the same burden of threats and challenges.

The delegation head said Egypt’s stability is important for the Middle East and Europe, adding that the EU supports Egypt’s economic development effort. The EU understands the hardships facing Egypt as a result of the regional turmoil, including terrorism and the refugee crisis.

The meeting addressed ways to enhance cooperation between Egypt and the EU countries and institutions in many fields.

No stability without just solution for Palestine: Shoukry