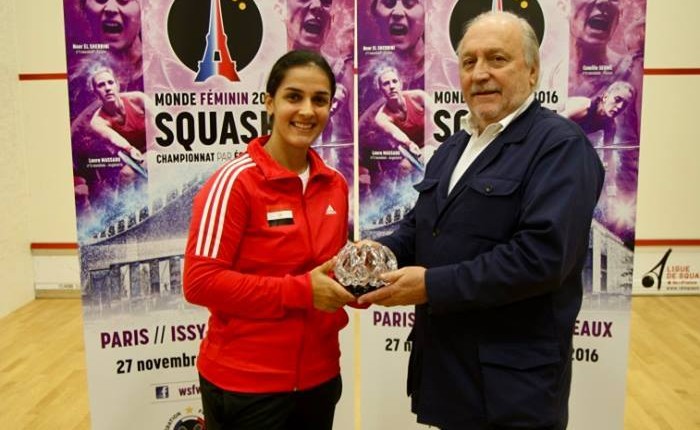 The WSF is honouring Egyptian squash champion Omneya Abdel Kawy for her tenth time participating in the WSF Women’s World Team Squash Championships. Abdel Kawy is currently competing in the championship, which is taking place in Paris, France.

Abdel Kawy’s first time participating in the competition was in 1998, which took place in Stuttgart, Germany.

The event is held every two years, and in 2012 the Egyptian team ranked fourth. The event took place in Sheffield, England.

Also at the 2002 and 2004 championships, celebrated in Odense, Denmark, and Amsterdam, the Netherlands, respectively, the Egyptian team came in the fourth place.

At the 2006 championship, in Edmonton, Canada, the Egyptian team managed to become the championship’s runner-up.

In the 2008 championship, the Egyptian team surprised the world after it snatched the title for the first time in its history. Abdel Kawy had previously told Daily News Egypt that “it was a great achievement, as I think it was the first time for an Egyptian women’s team to win a world championship in any sport.”

Once more in 2012, the Egyptian team surprised the world after it won the 2012 championship, which was held in Nîmes, France.

The Egyptian team came in third at the 2014 championship which took place in Niagra-on-the-Lake, Canada.

The Egyptian audience is hoping for the best for their team in this year’s championship.