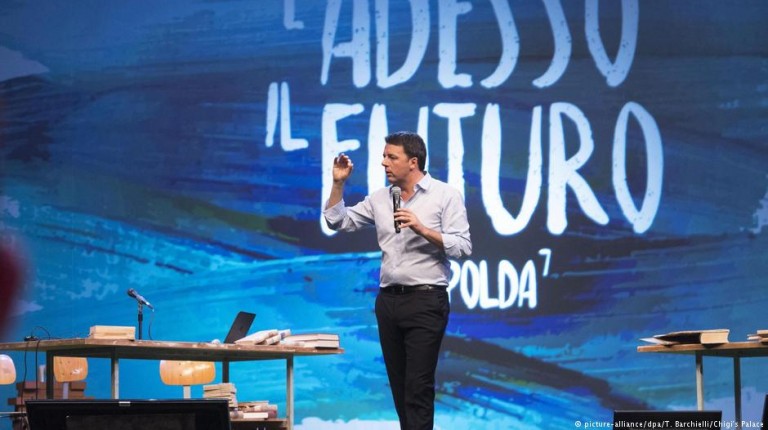 It’s been dismissed as a protest vote. But with Italian voters likely to reject a reform package in a plesbiscite, fears are growing that it could signal the beginning of the end of the euro.
In the wake of the British vote to leave the European Union and Donald Trump's victory in the US presidential election, the December 4 referendum in Italyhas taken on momentous importance.

Prime Minister Matteo Renzi says his country can be fundamentally reformed if Italians vote Yes. But if they vote No, it could be the beginning of the end of the eurozone.

Most polls predict a No vote. The proposed constitutional reform would curtail the power and size of the Senate, the upper house of parliament. Together with a change to the electoral law that already entered into force in the summer, it is intended to make the government's job easier.

If it passed, a party collecting 40 percent of votes in a general election would be given an absolute majority of seats in parliament. Strengthened in this way, the argument goes, it could tackle urgently needed reforms.

Chronic instability has been a permanent feature of the Italian political system. The country has had a total of 63 governments in 70 years.

"Governments have often failed at the very moment they attempted reforms," said Christian Dunstmann, an economics professor at University College, London, who taught in Italy for several years. "Over the past five decades, we have seen that important and necessary reforms in Italy have been difficult to achieve."

Renzi announced he would resign if Italians voted No – but later backtracked.

Financial markets are nervous ahead of the vote. Yields on Italian government bonds have doubled to more than 2 percent – an indication of investors' uncertainty.

Their fear is that a No would be avictory for populists and opponents of the euro – who could then seize power at the next opportunity.

Frankfurt-based research group Sentix, surveying around 1,000 financial professionals, estimates the likelihood of an Italian exit from the euro to be 19.3 percent – higher than ever before.

Renzi campaigned as a reformer three years ago. "He has moved many things in the right direction, such as the reform of employment law," Dunstmann said. "That makes it easier for companies to dismiss people." He also introduced tax relief for small and medium-sized businesses.

"The government has done its homework," said Jörg Buck, managing director of the German-Italian Chamber of Commerce in Milan. "The clear desire of business is for the Renzi government to continue its work."

Buck said a Yes vote would be essential to achieving that goal: "From the point of view of the economic associations, this would be the mother of all reforms," he said, adding that the No camp is less concerned with content than with "disabling the government."

The poor economic situation is weakening Renzi's position. Around 12 percent of Italians are still unemployed, while among the young the figure is almost 40 percent. Economic output is now lower it was than ten years ago. And the national debt is more than 130 percent of gross domestic product – the second-highest level in the eurozone after Greece.

A No vote at the referendum would be a way for many Italians to vent their anger. No to pro-market reforms. No to austerity. No to the establishment. No to the euro and the EU. "Trump has shown us that you can win against anything and anyone," Matteo Salvini, head of the populist Northern League, said.

The European Central Bank fears a No vote could trigger a shock on the financial markets. "Depending on the extent of this shock, we would then have to consider whether we need to do something or not," ECB Vice-President Vitor Constancio said.

When it meets just four days after the referendum, the ECB could send signals to calm the markets. A further easing of monetary policy would, however, intensify the already loud criticism from Germany.

Added to this is the unresolved crisis of Italian banks suffering under a mountain of bad loans.

London macroeconomic consultancy Lombard Street Research says this will be the first test of market sentiment after the referendum. It comes with around 70 billion euros' worth of Italian bank bonds maturing in the coming year.

"The first test of the market's mood after the referendum will be Monte dei Paschi's plan to raise capital, probably in early December," an LSR report said. "UniCredit is set to follow suit later in the month."

"The referendum is not the key risk; (medium-term) economic stagnation is," the report said. Not only would Italy be threatened, but the entire eurozone.

"The problem is that the euro can't work with its current membership and is globally antisocial in the extreme," LSR chief economist Charles Dumas told DW, adding that the Germans need a completely different monetary policy than the Italians.

"So populism has a solid foundation – and plenty of scope to upset the EU establishment after the Italian referendum."

The Netherlands' general election is in March 2017, followed by France in April and then Germany in the autumn. In each of these countries, there is a strong populist party that rejects the euro and the EU.

In Italy, the next regular elections are scheduled for the spring of 2018 – assuming Renzi can hold on until then.