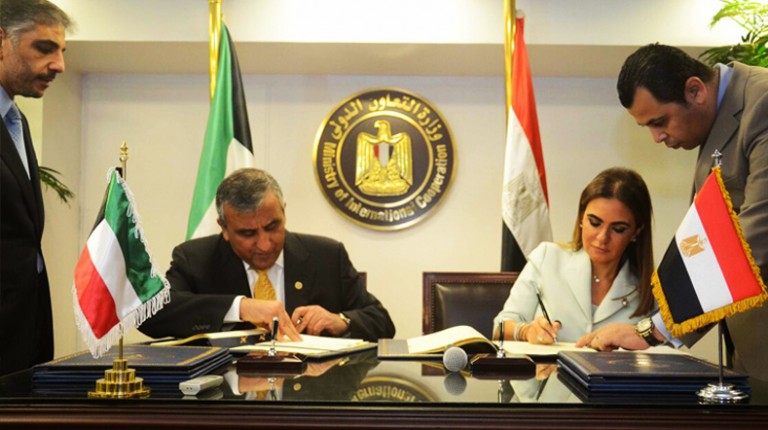 Minister of International Cooperation, Sahar Nasr, signed on Sunday three cooperation agreements with the director general of the Kuwait Fund for Development (KFD), Abdel Wahab Badr. The agreements, signed in the presence of the Kuwaiti ambassador to Cairo, are worth EGP 2.5bn, equivalent to $135m.

The projects will have a developmental and social impact on citizens and improve services offered to them, according to Nasr.

She explained that the first agreement signed is funding offered by the KFD to the establishment of a water desalination project with a capacity of 150,000 cubic metre.

The project’s implementation is expected to begin in early 2017, and construction work is expected to conclude by 2019. It is considered the second project financed by the KFD in the Sinai Peninsula Development Project. The first one included establishing five water desalination plants in South Sinai for $100m.

The second agreement is a grant to finance several projects in healthcare and sewage management, among other sectors, in several governorates for $15m.

According to the minister, a project will be undertaken to enhance the quality of municipal services where Syrian refugees are located in Giza. A similar agreement was signed in January for EGP 20m, and was used to build 30 schools in governorates with large numbers of Syrian refugees.

Nasr said that the third agreement is a grant directed towards financing technical and economic feasibility studies of two projects. The first is the establishment of a solar energy power plant with 1,000 MW capacity, while the second one is the establishment of an integrated factory for the production of solar power panels. She noted that these projects are part of the government’s national plan to advance with the solar power sector in Egypt, aiming to make renewable energy contribute 20% of the total produced energy by 2020.

The International Cooperation Minister expressed her admiration towards the extended cooperation between Egypt and the KFD, pointing out that the cooperation portfolio between the two parties has reached $3bn since the establishment of the fund. The amount was directed towards funding 42 development projects in several fields, in addition to 14 technical aids.

For his part, Badr expressed his happiness with the signing of these agreements, noting that in March, the rest of the pledges made by the fund will be fulfilled for $300m.