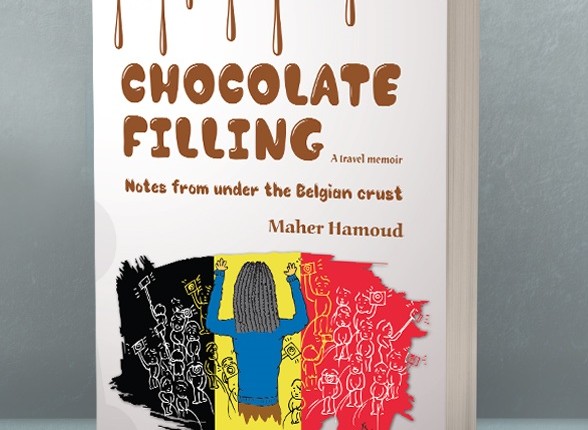 Maher Hamoud has spent much of his professional life as a journalist. The bulk of that time was spent working in his home country of Egypt, always deeply rooted in the events on the street even during his tenure as editor-in-chief of this very paper. Hamoud is a trained economist, an experienced journalist, and an outspoken commentator on Egypt, the Middle East, and “East-West” relations. It is perhaps surprising then that the first book he would publish is not a treatise on modern politics or socioeconomics. Instead, Hamoud has written a travel memoir that is deeply personal yet accessible to any reader who has ever had to navigate the awkwardness of a new culture.

Chocolate Filling: Notes from Under the Belgian Crust, is no typical travel memoir though. It lacks all the tropes you expect from that genre, especially from an American perspective (there’s no road). More generally though, it lacks a fundamental component of travel memoirs: travel. Or more specifically, there is little talk of the act of traveling or journey, save a few fleeting passages. In Hamoud’s world, he is always somewhere, rooted, whether that is at the café Maison du Peuple in Brussels, Manteca in Ghent, or watching the Brits vomit and piss their way to the New Year in London’s streets.

This is precisely the strength of Hamoud’s writing, and Chocolate Filling is a prime example of that. Hamoud has an uncanny knack for making himself a local in whatever city he happens to be in, yet remains ever the working journalist, always intently engaged in cold observation. In a sense, Hamoud’s work flips the old format of a travel memoir on its head and we are left feeling as if it is the cities and their inhabitants that pass through our author, not the other way around.

Chocolate Filling does not hold any punches when it comes to its examinations of these cities and respective denizens. Hamoud writes with scathing honesty, but not bitterness. It is admiration coupled with brutal honesty. In one moment he is recounting his defence of Belgians under attack by their European counterparts, the next moment he is deploring the country’s spectre of anti-Arab racism.

Despite this, Hamoud’s criticisms and blunt insights come off like the stern reprimand of a friend who wants nothing more than for you to be better. There will be some who will no doubt receive these as an embarrassing exposé of Belgian racism, both the “mild” grinding and overt aggressions. That is in some ways the point though: it should be embarrassing. Our author is only one of many people of colour who face daily humiliation in a society where racism is so normalised. Hamoud knows this, and he is right to acknowledge that his place as a journalist is to be a pain for those institutions who would otherwise present themselves as champions of tolerance and acceptance.

It would also be underselling the book to say it is about Belgium. Yes, of course Hamoud finds himself often grappling with one criticism or love of the country or another.  The whole place is itself characterized by the  mysterious “bug in the system”, the casual response by many a Belgian whenever something seems to not quite be working.  Your bank card was sent five times? Must be a bug. No insurance? Probably a bug.  No formal government for 20 months? Certainly a bug.

But no. More than anything, Chocolate Filling is about its author. The work somehow manages to be intensely personal, yet so often dispassionate, a feat that is likely attributable to Hamoud’s skill as a journalist. In one moment Hamoud describes, almost as if observing himself, the shock of hearing that Camille Lepage, his friend and fellow journalist, had been killed in the Central African Republic. In the next, he is back to analysing the Belgian youths’ response to the “Brussels Lock Down”.

I tore through this book because it succeeds where some of Hamoud’s contemporaries have failed. Rather than attempt to elevate the everyday to a place of reverie, it recognizes these inanities for what they are: contradicting, absurd, and maddening.  It is about being foreign, being on the outside, being loved and adored by people you would alternatively encounter as bigots. It is about the pain-in-the-ass of life, the hypocrisies we face as citizens in an ever more global world, and the loneliness of being the Other. Readers should count themselves lucky to have the opportunity to consume such honest work.

Guilty pleasure: Chocolate with a side of remorse

Remembering Camille Lepage: The lady with no redlines

Europe and those Arabs (5 of 5): The EU as a post-colonialist bank