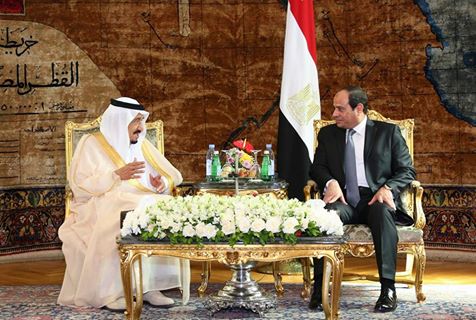 Bilateral relations between Egypt and Saudi Arabia were significantly strained over the past few weeks, after Egypt deviated from its loyalty to the oil-rich country and took stances that did not comply with Saudi Arabia’s plans.

Despite pouring tens of millions of US dollars into Egypt following the ouster of former president Mohamed Morsi, the two countries have opted for different paths in their relations and their foreign policies.

Officials from both countries repeatedly insisted that relations are not affected following Egypt’s odd moves that explicitly opposed its unspoken deal with Saudi Arabia. However, Egypt’s President Abdel Fattah Al-Sisi ended his visit to the United Arab Emirates (UAE) prior to the arrival of Saudi Arabia’s King Salman bin Abdulaziz Al-Saud—a step Al-Sisi would have never taken two months ago.

Political analyst Tarek Fahmy told Daily News Egypt that the tension between Egypt and Saudi Arabia was not a result of the Tiran and Sanafir islands case, and have not stemmed from Saudi’s bad terms with Egypt’s Foreign Affairs Minister Sameh Shoukry. However, the problem is much deeper.

On 8 October, the first confrontation happened between Egypt and Saudi Arabia, when the former voted in favour of the Russian draft resolution in the United Nations (UN) security council regarding a peace solution in Syria. During the same session, Egypt had also voted in favour of a French resolution for Syria, a move which Saudi Arabia’s envoy to the UN described as “painful.” The two resolutions included key mutual points regarding ceasefires and humanitarian aid. Nonetheless, the Russian revolution did not include any provisions for halting airstrikes, which means that the Russian aerial bombardments in the Syrian city of Aleppo would continue. None of the resolutions were adopted by the UN security council, as they were both vetoed.

While Russia is backing Syrian president Bashar Al-Assad, along with Iran which is not on very good terms with Saudi Arabia, and Lebanon’s Hezbollah, Saudi Arabia is backing the rebels in Syria. Since the war had started in Syria, Egypt had announced that it supports the Syrian people and its encouragement to a political solution, claiming that it is the only way out to the Syrian crisis. However, in an interview with a Portuguese TV channel in November, Al-Sisi said that Egypt is supporting the Syrian Arab Army (SAA), which is affiliated to Al-Assad.

Fahmy said that Syria is one of the main issues between Egypt and Saudi Arabia; however, he added that it is not the only problem. The Saudi-led coalition in Yemen that is fighting the Houthi rebels was also another obstacle that led the two countries to their current dead-end.

Egypt had supported the Saudi-led coalition and its war in Yemen, and also announced full support to the current Yemeni president Abd Rabbuh Mansour Hadi, which complies with the vision of Saudi Arabia. However, Egypt’s support to the coalition was reluctant, as it had not made major contributions to the military campaign as Saudi Arabia had expected.

Fahmy added that Egypt’s insufficient support to Saudi Arabia in the Justice against Sponsors of Terrorism Act (JASTA) was yet another problem that tensioned the bilateral relations. The JASTA, which was vetoed by the US president Barack Obama, would have given US citizens who lost acquaintances or belongings in the 9/11 terrorist attack on the World Trade Center the right to sue Saudi Arabia.

Amid the current tension in relations, Egypt is trying to make new allies. Saudi Arabia’s oil company Aramco had suspended its oil supply to Egypt in October and November. Egypt shifted to Iraq for their oil supply. Iraq is also not on very good terms with Saudi Arabia.

According to Fahmy, there are two expected scenarios to the relations between Egypt and Saudi Arabia. Either the situation will remain the same until the two countries reach a common ground, or there will be an escalation in the tension.

However, Fahmy said that the latest visit of Al-Sisi to the UAE was an attempt by the latter to soothe relations between Egypt and Saudi Arabia. Egypt preconditioned that relations will be restored when political decisions stop impacting economic deals between both countries and Saudi media stops its campaign against Al-Sisi.

Fahmy further added that the UAE’s attempt was not the first. Abu Dhabi crown prince Mohamed Ben Zaid attempted a similar move, but to no avail.

Egypt’s Foreign Affairs Minister Sameh Shoukry previously denied any tension between Egypt and Saudi Arabia; however, Egypt seems to be indifferent towards Saudi Arabia through its recently voiced stances.

Al-Sisi visits Saudi Arabia in April, after two months of tension between Cairo and Riyadh