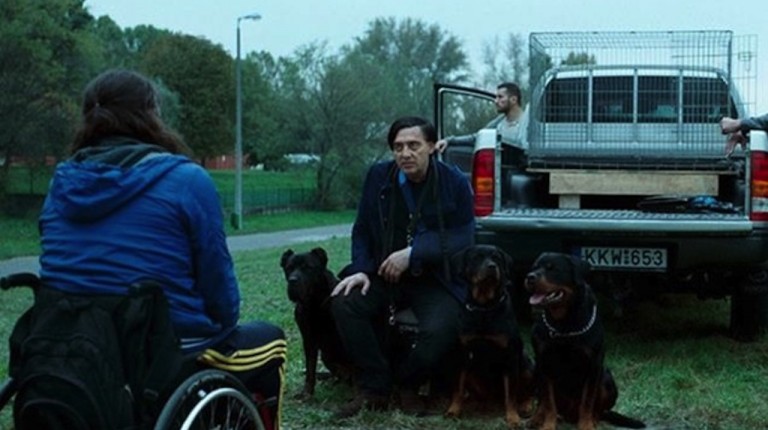 If you’re into fun, violent action movies mixed with a bit of drama, then Kills on Wheels would be your optimal choice. The film features a story about three paralysed men who form a gang, which leads them to go on many adventures together. The gang is gathered around crime, but is also based on friendship.

The film begins with Zoli, a young paralysed man who draws comics with his friend. The sketch in his hand turns into a real scene when the man in a wheel chair begins to move. From this point, we begin to understand that the film we’re about to view may be born out of someone’s creation and might not be real. The film portrays the scenes as though they are taking place in real life, but sketch breaks in between remind you that this is all part of an imagination. Everything you see is either based on a sketch or turning into a sketch.

The two main characters in the movie seem to suffer from a series of crises, but each on his own. The badass fireman, who appears to be powerful, is suffering from a crisis of love with his ex-girlfriend. Zoli has an issue with pride, which is depicted through a conflict where he doesn’t want his father, who abandoned him and his mother, to pay for his operation. He prefers to die in his wheel chair than to live based on his father’s money. This indicates that everyone has two sides that most of the time contradict the other.

As the plot unfolds, we learn that there is conflict brewing inside Zoli. He wants his father to see him as something more than just a paralysed son. He seeks his approval. He wants a father that would take him into bars, drink beer with him, get girls for him. He wants a father that is a hero in his own world. The fireman is a badass but he’s paralysed like him. He has the same limited space, but he is also more masculine. He is essentially creating a role model that isn’t completely fictional, someone Zoli could actually become.

As the plot nears its end, it becomes burdened by explanation. Exposing the plot that much deprives the entire film of its mystery.

Generally, Kills on Wheels is a good film that includes an exhilarating combination of comic sketches and real-life scenes. It is portrayed through a soundtrack that gives you goose bumps, and features killing scenes that will leave you breathless. In the end, everybody is searching for a hero. Sometimes you’re lucky enough to find one, but sometimes that hero needs be your own creation.