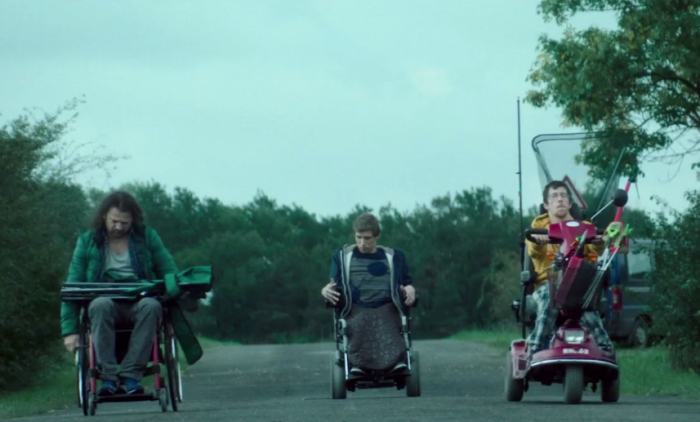 Kills on Wheels is a charming, witty, and funny feature by Hungarian director and writer Atila Till. It’s inspiring and empowering for the differently-abled, packed in a loveable action-comedy. Till takes on a lighter approach in dealing with the sensitive subject, instead of the tearjerker approach commonly used by filmmakers. The result is a very smart and endearing picture that just about does what it’s supposed to do.

Two wheelchair-bound young men, Zoltan Fenyvesi and Adam Fekete, meet Janos Rupaszof (Szabolcs Thuróczy), an ex-fireman who is also confined to a wheelchair. He is a “cliché”, with long hair, an untamed beard, a badass attitude, and a failed love story. Thuróczy delivers a great performance, crowned by great chemistry with his co-stars. He teaches them about life and they grow closer as a family, which is a main theme in the film as Fenyvesi has problems with his estranged father.

The three of them team up to work for Rados, a high-class criminal, because they need the money, and more importantly, a purpose in life. Rupaszof also needs friends, or rather allies.

Till is telling a rather unusual story of empowerment, where disabilities are portrayed as special abilities. Rupaszof is never considered a threat: when they stage an assassination in the middle of the streets, no one suspects he is the killer. Fenyvesi’s character throws off the police when he tells them to go looking after people with different looks because they thought a disabled person would not be affiliated with a crime.

The movie uses the characters’ disabilities in a humouristic, but charming way. In a non-offensive manner, the gags are therapeutic. In that context, the film states that we can joke about something as devastating as disabilities in a way that would help us to deal with it.

The main characters are two disabled young men who work as co-assassins for money, but deal with quite relatable problems, such as the need to belong to a bigger picture or to have a father figure, or the sense that you have a purpose in life and assert that you exist and matter. Almost anyone can relate to these themes, and that’s where it connects the audience with these adorable young men, and in a larger sense with the disabled community.

Till was inspired to make this film when he was volunteering with the disabled. He found Zoltan Fenyvesi, who is an Instagram star after completing a New York marathon on his hand bike in 2014. Co-star Adam Fekete is working now in TAP theatre as an actor, writer, and director.

Kills on Wheels works as a light action-comedy that can be appreciated by critics and audiences alike in this very special context, which is what makes it come out as a special film of this year.

A horror play incarnates the fight between humans and demons