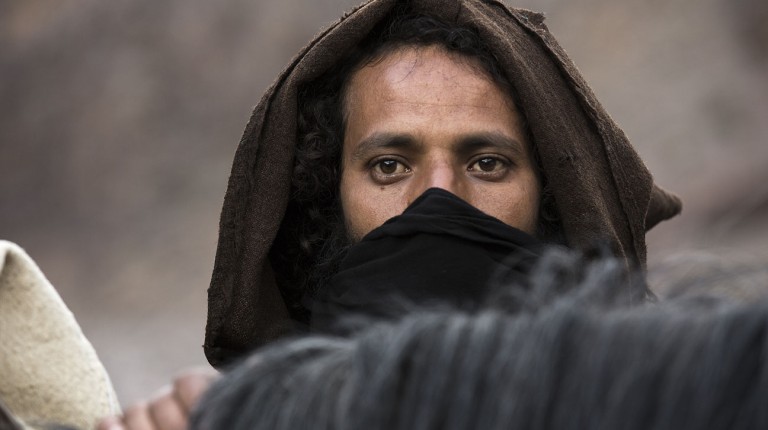 At first, Mimosa seems to be a simple story: a caravan transports a dying sheikh to be buried with his loved ones in the medieval city of Sijilmasa. When the sheikh dies mid-journey, the task is nearly abandoned. The two men who were accompanying him continue on with their new cargo of a corpse, despite not knowing the way. Later, a pseudo-mystic mechanic and a mountain man accompanied by his mute daughter join them. To watch this film is to suppress an appetite for a well-rounded plot or lucid editing, but you can still feast your eyes and ears.

As these specks of flesh traverse the unforgiving Moroccan landscape, the cinematography treats the desert and mountains, underscoring the terrain’s daunting presence over the travellers. The minimal but resonate overtures that overlay these shots seem to reverberate from the void between the earth and the sky.

Careful attention to foley and sound editing, partnered with radically stark cinematography should rectify any disgruntled audience member who cannot justify the slowness of expedition or the sparse, but poignant, dialogue.

When they walk at night, the screen emits the darkest navy blue. Only visible are faint outlines of the horizon and their bodies walking towards it, but ever-present is the sound of hooves hitting the earth and pebbles skipping down a cliff.

Like any challenging work of art, if you’re open and patient with Mimosa’s form, you will find that its pacing provokes the friction between people’s faith in the possibility of salvation.

“We’ve never done anything big in our entire life,” says Said to Ahmed. “This is it.” They conduct invocations of faith and chance operations, while fits of doubt hang over their journey. In essence though, Mimosa strikes me as the kind of film that will assail the heart of a cinephile who is deeply invested in how a film attends to the space of the cinema itself. This production would be utterly lost on a laptop.