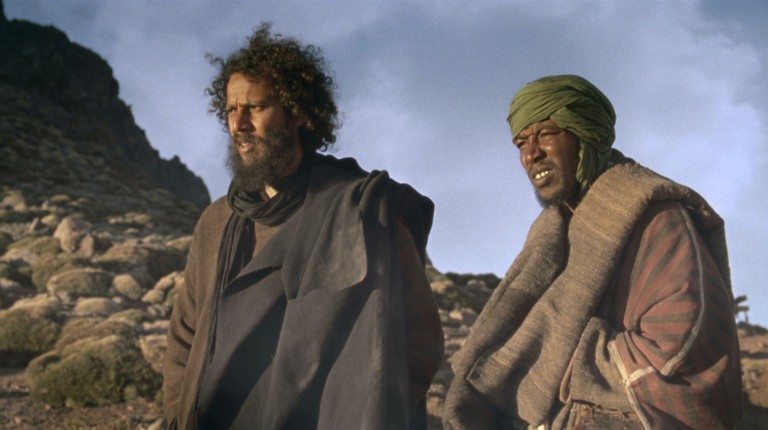 Named after a café in Tangier, Oliver Laxe’s crypto-Sufist masterpiece Mimosas takes us on a metaphysical journey through the Moroccan desert around the Atlas Mountains. A dying sheikh, escorted by a caravan, is headed towards the city of Sijilmasa to be buried amongst his loved ones.

Two hash-smoking wanderers, Ahmed and Saeed, join the caravan with the intent to rob it, but they change their plans when the sheikh dies before reaching his resting place. In exchange for some money, they decide to take his body to Sijilmasa, while the rest of the caravan turns back. At this point, Shakib, a young lad with low mental capacity and presumed holiness, joins Ahmed and Saeed in their journey of atonement and soul-searching across the backdrop of the epic scenery of the Moroccan desert.

The film is divided into a prelude and three parts. Each part is named after different positions in Salah (bowing, standing, and prostrating). The story does not proceed in chronological order, especially the last part, which consists of mind-boggling and disorienting jumps in space and time. One of these jumps takes us from watching Ahmed alone in the middle of the inhospitable desert wearing his Bedouin clothes, to him waking up in a car accident in the middle of a city, face covered in blood and wearing a shirt and pants. This gives the impression that the movie is nothing but a series of a mystic’s collation of epiphanies, an artistic and cinematographic depiction of a Sufi receiving revelations from God in the form of an anecdote.