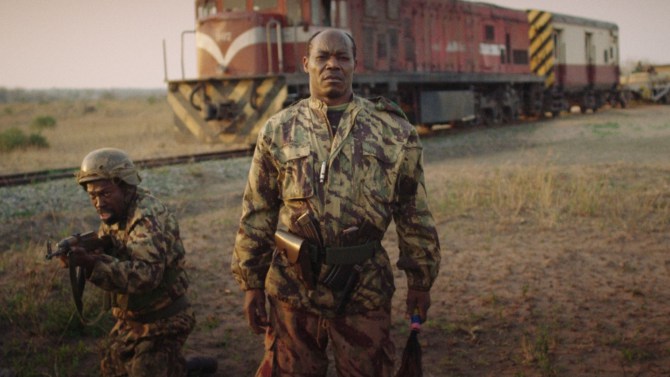 “Sometimes those who are supposed to protect us are the ones who attack us,” says the main character Rosa in the film The Train of Salt and Sugar, screened at the Cairo International Film Festival. The film, funded by institutions in five different countries including Portugal and France, is about dozens of people accompanied by army personnel who are taking a train from the land of excess salt to the land of sugar in Mozambique during the war in the early 1990s. The film, directed by Licinio Azevedo, is a western that embodies the style of an action-packed train robbery scene with a bit of drama, romance, politics, and social justice.

The travellers are facing two kinds of enemies: the enemies of the country who want to destroy it, and the other enemies from the army itself who insult, rob, rape, and kill the people they are supposed to protect and serve. The film shows their brutality in various scenes, especially with Salomao, who reflects the ugly face of the army, especially in times of war in which he kills innocent people in the most barbaric ways. Claiming that they are traitors, he assaults men, rapes women, and steals the travellers’ belongings, money, and even food and water. Salomao is a kind of a soldier that thinks “anything goes” in times of war, especially for soldiers who rule and possess this train and everything in it, including the people—not to mention the entire country, which is represented in the train itself.

On the other hand, we find a good soldier called Taiar who stands up to Salomao and his brutality against the people on the train, especially the nurse Rosa, whom Taiar falls in love with. Rosa is an extreme foil to both army men because she can heal people and helps them stay alive while the soldiers take people’s lives.

Although the film is a western in which men take up about 80% of the screen time, I think Rosa is the main character. She symbolises the innocent people, or the public, who are not part of the war between the two parties. They just want to live peacefully on top of the chain of mountains that appear in the final shot. Although the mountains and Rosa are in the same frame, the train which is packed with soldiers and weapons is still between her and her ideal place.

Topics: film filmdne The Train of Salt and Sugar