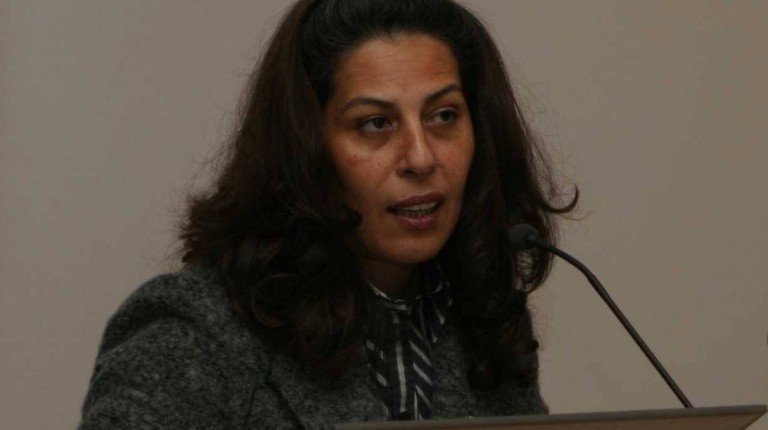 Fadia Fouda is a Palestinian woman who lived in Lebanon and had married a leftist during the Lebanese civil war. Given her husband’s political ideology their lives were in constant danger in Lebanon, which pushed them to leave Lebanon and go to Germany. She was the last person to obtain an entry visa to Eastern Germany, an hour before the embassy in Cyprus closed, before it was reunified in 1990.

Fadia worked with refugees in Lebanon, helping them adapt to their new lives in the refugee camps. It never occurred to her that she would face the same situation once she became a displaced person in need of help from others in Germany.

“We were a family with four children,” Fouda said. “He left for Germany before me and our children did, and we followed shortly after by taking a boat to Cyprus and from there to Germany. Once there we began the process of obtaining residency.” Her and her family were granted political asylum within a year.

Learning the German language proved to be difficult for Fouda. “We studied the language and looked for jobs. At first I worked in a museum, answering questions visitors may have had. I also worked part-time in different places, and the income was enough to make a living at first.” After 10 years, things finally began falling into place for Fouda. “I conducted a study on Palestinian women in Germany for a university,” she explained. “I had experience working with immigrants and refugees so it was something I was good at.”

Fouda said that prior to going to Germany she had many inflated expectations about life in Europe. “At first, we were shocked by the reality of the situation,” Fouda explained. “We were able to stand on our own two feet, but it is a difficult experience and not everyone is successful.” To Fouda, perseverance is one of the most important aspects of successfully navigating their new realities. “New migrants and refugees must also overcome the language barrier as quickly as possible, and come to understand their adoptive society and its culture.”

“I believe the new generation of migrants and refugees are more fortunate than we were because they are better equipped to understand their situation more quickly,” Fouda said. “When we first came to Germany language lessons were not available prior to obtaining residency, but now the government acknowledges the right of refugees to learn the language. This policy is dignifying for refugees, and it is a positive development.”

When it comes to finding employment, Fouda believes that the situation has vastly improved. “For many years, asylum seekers were not allowed to gain employment, but now a refugee may start working three months after applying for asylum if no German citizen is able or willing to take the job. This is a big development as some of the older refugees remained in Germany for up to 20 years without having a job.”

According to the Asylum Information Database, new refugees in Germany are placed in an initial reception centre for a period of up to six months; however, refugees from countries that are deemed safe may find themselves at such a centre for the entire duration of their application process. Asylum seekers that are allowed to leave these centres may not pursue self-employment, but have the right to apply for an employment permit. To be eligible for such a permit, the asylum seeker must obtain a job offer from an employer who will guarantee employment if the application is approved, providing a detailed job description is handed to authorities. Once employed, job centres are required to carry out priority reviews of the job offered for 12 months, in case a more suitable German or foreign national with a more preferable employment status exists. In essence, if there is a German or European Union citizen capable of doing the same job, priority is given to them. After a period of four years has passed, all restrictions on work and education are lifted.

“The new arrivals are lucky,” Fouda said. “Previous generations of refugees who may have started their application process 17 years ago are still waiting on the government to finalise their asylum application. After four years, if someone’s asylum request is still not finalised or if they have yet to be granted residency, they are entitled to work. This is a major achievement.”

With a growing number of refugees from the Middle East seeking asylum in Europe, Islamophobia has also become more prominent throughout the continent. “A large part of public opinion and many political forces have fears, and they do not hide them,” Fouda said. “Unfortunately, we are responsible for a large part of that, because we fail to provide a true picture of ourselves, do little to improve our own situation and isolate ourselves from the wider society.” She added, however, that refugees living in Germany “live in a real democratic atmosphere in which freedom of expression exists and restrictions are only imposed when refugees behave suspiciously. Based on my experience, Germans don’t fear ideas, and authorities don’t act unless there’s particular proof of suspicious activity.”

Speaking on Germany’s refugee policy, Fouda praised German chancellor Angela Merkel. “Germany is not a charity, but the government has a vision for the future,” she said. “German society is aging, and chancellor Merkel has innate intelligence that pushes her to work for the betterment of the coming decades. Most of refugees are young people and have the ability to work and fill the gap in the structure of the society, especially given that the country needs 300,000 workers.”

In regards to the complaints many refugees have had about the difficulty of learning the language, and their feeling of mistreatment, Fouda believes these feelings reflect real problems. “You are in a strange country and confronted by a new language and culture. Imagine how it must feel when you are not able to properly express yourself. It takes time to understand the way things are, and you must learn many new skills. All of this takes time.”

Integration is not easy, says Fadia. “You must have the spirit of a hunter; if you are prey, both society and expatriates will eat you alive, but if you are a fighter and have the will then despite the problems you will reach your goal.”

Fadia concluded by saying she hopes that every refugee coming to Germany will understand what to expect from day one. “Take the time to learn the language, it will help you find a job and allow you to stand on your own two feet within a year and a half. If you are prepared it can help you reduce the amount of time you spend suffering and wasting money making wrong decisions.”

‘Can we do this?’ – The costs of the migrant crisis